Day three of the CCSCSL Invitational was a day for the GMs and Irina Krush. Krush, who had drawn her first three games, won both of her games Thursday to position herself well for a run at a GM norm. She now needs three points out of her remaining four games to secure a norm.

The GMs Giorgi Kacheishvili and Andre Diamant both won their games Thursday to lead with 4.5-0.5. I have seen a lot of round-robin events, but I have never seen two players win at such an impressive rate. 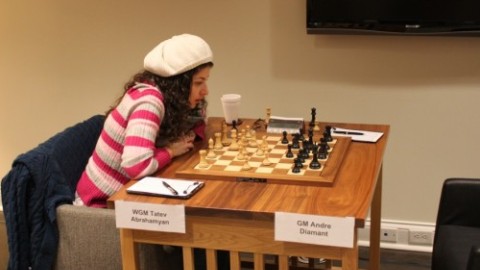 Unfortunately, WGM Tatev Abrahamyan lost both of her games Thursday, but she can still secure an IM norm by scoring three points out of her next four games. Abrahamyan was black against Krush in a King’s Indian defense, and white (!) was able to crash through on the kingside and win easily with her extra pawns and attack.

Abrahamyan played an interesting attacking game against the unstoppable Diamant, and his cool defense in the face of an impending mate was impressive. She sacrificed a rook and had threats everywhere in a sharp Sicilian, but Diamant sacrificed some material of his own to beat back the attack and emerge with a winning endgame.

Kacheishvili, like Diamant, looks unstoppable as well. He played an interesting opening novelty against IM Greg Shahade in a Bogo-Indian, and soon he had a blistering attack that ended in mate as Shahade’s king took a stroll up the board. 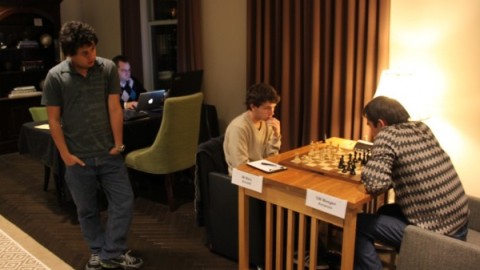 IMs Danny Rensch and Angelo Young saw their woes continue, and both stand at 0-5! This will be a tournament they will both want to soon forget.

At this point, both women in the event are still in the hunt for norms, but they both need a strong finish. IM Marc Arnold could also secure a norm, but will need to score 3.5/4 with tough competition ahead.

Which GM will continue his blistering pace, as they both stand at 4.5-0.5? Will the players continue to impress spectators with their daring play, sacrifices, king hunts, and decisive results? Follow rounds six and seven today by watching the games live at www.saintlouischessclub.org.