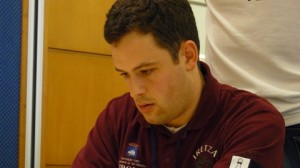 Chessdom Arena, the online chess playing platform, reached the registered 80 000 users mark yesterday during R3 of Tata Steel 2014. To celebrate the occasion, there will be a GM Challenge on Chessdom Arena today. Any player with 30+ wins can join the queue to play free games vs GM Christian Bauer. If you do not have an account, you can register here, and later replay the games in GM Christian Bauer’s profile.

Chessdom Arena is still in early beta, preparing a large scale release in the next months, with daily GM simuls, unique way of playing and replaying games, and advanced tournament platform. All features will be free for regular Chessdom Arena players (based on number of wins, not rating).

While designing the complete version of the playing platform, Chessdom Arena launched a live chess broadcast zone on December 1st, 2013. For the first time chess fans can enjoy live games from tournaments with triple engine analysis – by the engines Komodo (champion of the last TCEC Season), Stockfish (many times TCEC finalist), and Houdini (champion of the previous TCEC Season). The new broadcasting style quickly gained popularity among the audience and the tournament organizers too, being the official broadcasting platform of the second parts of World Team Chess Championship and World Youth Chess Championship, thus registering over 1 million unique users for the first 45 days.

The live broadcast itself is also in early beta. Many improvements and features are going to be launched in the next month. Practically every tournament innovations will be rolled out.

If you are an organizer and you want your tournament broadcast in Chessdom Arena, contact us here