Russian Internet giant “Yandex” has presented a list of ten most popular sports in Russia. The list was composed after examining queries in the Yandex search engine.

The two most popular sports are football (5-10 million queries per month, depending on season) and hockey (6-8 million per month).

The other sports in the top ten list are motosports, basketball, biathlon, boxing, volleyball, athletics, tennis and chess (with expected 2-3 million per month). 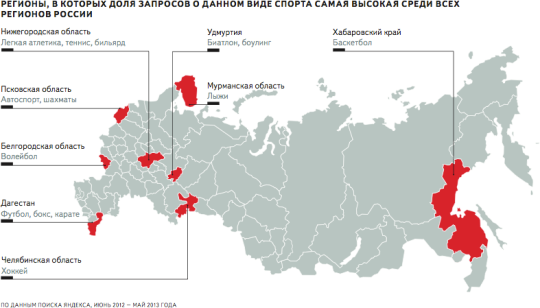 Interest in various sports depends on the regions. South of Russia is more interested in football, while Chelyabinsk Oblast and Urals prefer hockey.

Belgorod Oblast follows volleyball, thanks to the successes of the local team.

Relative to the total numbers, chess is most popular in Pskov Oblast, Republic of Kalmykia and Altai Republic.

Udmurt Republic is home to biathlon and bowling fans.