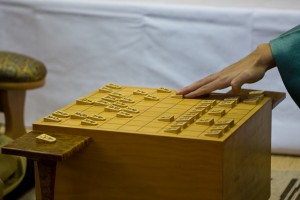 Chess and Shogi took place in Marseille with the participation of multiple chess and shogi players. It was the first edition of such double event and created much interest in the local board games community.

Among the invited Shogi players Madoka Kitao, who took part in the biathlon, is a professional Shôgi player ranked between the 10th and 20th spot in the World. She kindly made a 2 hours “warm-up/improvement” session just before the tournament, offering mate-problems to solve.

GM Yannick Pelletier and myself were taught the rules of the games about 5 months ago by the French FIDE Master Manuel Vallès, and we wanted to try it because in a way it is fun to try oneself in another field. I was curious to see if I could reach a decent level in another interesting board game. Some of the other chess players that came to the event were driven by similar interest, and even though they learned the basic rules only few days before the tournament, (and some even a couple of hours before the start!) it turned out to be a great experience.

For those unaware of the game Shogi and its connection to chess around the world, an interesting read can be found here. There are many similarities between Chess and Shôgi, but still quite serious differences. Both require to calculate well, and, in my view, a certain feeling for the position. There are many more options for each camp in Shôgi at each move, due to the possibility of dropping a piece you have captured earlier on.

As a result, the Chess and Shogi tournament was quite open to the very end, because nobody was excelling both at Shôgi and Chess. The best Shôgi players could hope to score 4 or even 5,0/5 in Shôgi (draws rarely occur) + 3/5 in chess, in case of favorable pairings. The opposite was true for the best chess players.

Yannick Pelletier scored 4,5/5 in chess and 3,0/5 in Shôgi, followed by 6 players with 7/10. Madoka lost 1 Shôgi game, but managed to score 3/5 in chess. This enabled her to join this group and play a funny-crazy tie-break. Indeed, the 2nd and 3rd ranks were decided in blitz games where the protagonists had to play simultaneously a game of chess and one of shôgi. After completing 1 move at each they could press the clock. No need to say that a 5 minutes + 3 seconds increment per move game under such circumstances was quite spectacular to watch. All in all quite an interesting experience, and a motivating one!

Visit the official site of the French Shogi Fedeartion

More about Chess and Shogi in Marseille

Marseille-Echecs, the most important chess club from Marseille hosted the event, which received support from the French Chess Federation, the French Shôgi Federation, Europe-Echecs + ISPS. The vice-president of the Shôgi Federation is spending a lot of his time on a voluntarily basis to promote the game.

The French Shôgi Federation counts only about 200 members, and in general, outside Japan, the game isn’t very popular (yet). However, this year Marseille was selected as a cultural capital and as a result this enabled the sponsorship of EU- Japan-Fest, a Japanese organization that tries to promote Japanese culture within cultural capital cities, and without which nothing would have been possible.

The event also benefited from the support of the ISPS = International Shôgi Popularization Society whose aims are :

– enabling meetings of people interested in Shôgi, and providing information on the game
– reinforcing the net of non-Japanese players
– publishing books in other languages than Japanese
– helping people learn the rules (and then improve)