A total of 82 teams were divided into three Divisions. The most prestigious First Division was represented by 10 of the strongest Portuguese teams from 17th to 23rd August 2014 in Caldas da Rainha, a city in western central Portugal, in the historical Province of Estremadura, best known for its sulfurous hot springs and ceramic pottery.

Caldas da Rainha hosted the First Division Chess Championship for second year after 60 years, the first time was back in 1954. This edition gathered 98 players from 17 different federations, including 9 GMs and 14 IMs.

The direct encounter between GD Dias Ferreira (Average Rating: 2448) and Gaia Chess Academy (Average Rating 2631) in the seventh round of the competition finished 3-1 in favor of the champion.


You can find more information about the Divisions on the FPX site in Portuguese:
Division 1/ Division 2/ Division 3

Enjoy the photo report below! 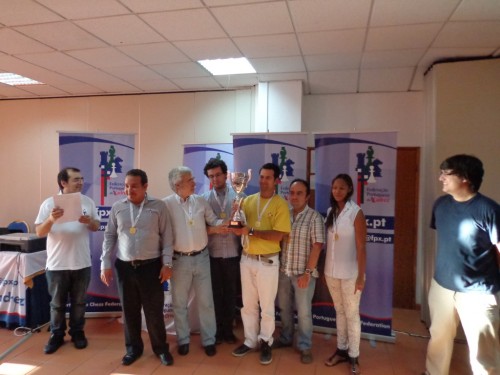 View from the playing hall in Caldas da Rainha