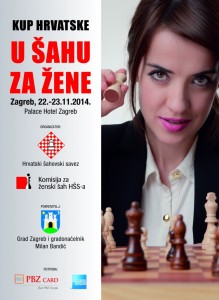 The Croatian Chess Federation and Croatian Comission for women’s chess organized the 2014 edition of the Croatian Cup for women on 22-23rd November 2014 at the Palace Hotel**** in Zagreb, the capital and largest city of Croatia.

The event was a 5-round Swiss Team rapid tournament with tempo of play 30′ + 30″, valid for FIDE rapid rating.

Third place was shared in a four-way tie by “Dama” Đakovo, “Liburnija II” Rijeka, “Mornar” Split and “Sisak” Sisak on 6 points each.

However, the young players from “Dama” Iva Hlavac, Neomi Grgic, Nadina Mahmutbegovic and Zvjezdana Ivekovic remained third on a better tie-break score. You can see the full standings below.