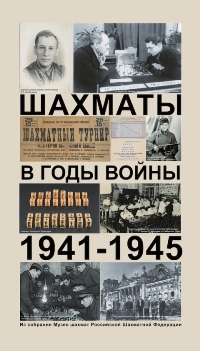 The Chess Museum of the Russian Chess Federation today opened the exhibition “Chess during the War 1941-1945” to celebrate the 70th anniversary of the Victory in the Great Patriotic War.

The thematic exposition includes unique documents and materials, most of which are displayed for the first time.

The new exhibition of the RCF Chess Museum, which tells the story of the game during the harsh years of the war, will become a moveable display enabling not only Muscovites and guests of the capital city, but also residents of St. Petersburg, Kaliningrad, Sochi, Chita and even French Normandy to admire the unique exhibits.

Among the items on display is the only chess book published during the war – the chess manual that went through the entire war with its owner; fragile crosstables of the Leningrad championships that miraculously survived the siege; and even the scoresheet of the deciding game of one of the championships; cardboard chess of besieged Leningrad; and chess-related documents of front-line Moscow.

Items restored for the exhibition include the wall newspaper “Women chess players in hospitals” of 1944, which spent several decades in an inconspicuous roll; photos and documents of top chess players working in hospitals for wounded soldiers; a poster of the Kuibyshev tournament of 1942 that was organized during fierce defense battles in the vicinity of Stalingrad; a 1944 poster inviting pupils to the Leningrad Pioneer Palace and its chess section.

There is also a photo of the Soviet participants in the first post-war international tournament with the fallen Reichstag on the background, which fulfills Samuel Marshak’s promise “We gave a check on the Dnieper and will checkmate in Berlin!” (an excerpt from the poem written for the 13th USSR Chess Championship).

The black-and-white chronicle of the everyday life of chess in frontline dugouts and headquarters, ships and airfields, reports from tournament rooms, chess-related cartoons and caricatures dating from WWII provide clear evidence that even during the most sever tests chess remained an important part of the country’s life.

“It seems unbelievable that people were playing chess in besieged Leningrad and in the course of fierce bloody battles near Stalingrad, and tournament scoresheets were drawn up,” says Andrey Filatov, President of the Russian Chess Federation. “Even during the horrible winter of 1941–1942, newspapers wrote about the results of tournaments, and qualification passes were issued. Each of the exhibits, each table or poster on display not only tells a story about the heroic pages in the history of chess – which in Russia is inseparable from the history of the country – but also presents evidence of the uncrushable spirit of the nation, which during the most tragic days of its history maintained its chess traditions and intellectual resource.”