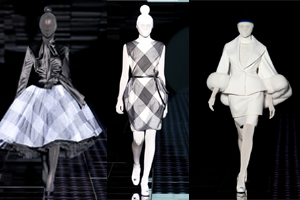 Chess fashion fever has taken over Khanty Mansiysk just a few days before the start of the World Cup 2011. Black and white motifs are spreading among the citizens in the region, in expectation of the upcoming chess tournament.

History of chess fashion in Khanty Mansiysk started with the 39th Chess Olympiad. The International Fashion Center prepared a collection of 160 sets of suits for the flag carriers. Now it is confirmed that “Black and White” chess fashion will also be part of the opening ceremony in the World Chess Cup.

The collection designers explain the details, “The World Cup collection will be shown for the first time in Khanty Mansyisk. So far it has been shown at the Moscow Fashion Week and the mix of contrasts combined with geometric precision and fine art amazed the audience there with the unpredictable calculation, logic, and poetry.”

These is not simply a statement from the designers. It is worth noting that last year a collection of “Black & White” won the most prestigious Grand Prix of Russia design competitions “Russian Victoria.” The World Chess Cup presentation will have the same ideas and core team behind it, headed the professional designer and member of the Union of Designers of Russia Elena Skakun, but also a fresh touch will be brought by the new experimental designers of the autonomous “International Fashion Center”.

The opening ceremony will take place this Saturday, August 27th, at the concert center Ugra Classic at 20:00 local time. The games will start the next day at 15:00 at the venue of the World Cup – the Ugorian Chess Academy.