On 9th July 2013 Chess in Schools and Communities (CSC) was presented with the Innovative Project Award at the 2013 Sport and Recreation Alliance Awards sponsored by specialist insurance company Hiscox.

The award was presented to the charity’s Chief Executive, Malcolm Pein, by HRH The Earl of Wessex at St. James’s Palace in London after the charity impressed the judges with their ground-breaking initiatives over the past year.

With studies showing a clear link between playing chess in primary school and improved concentration and educational attainment, CSC has doubled in size in the past year and is now operating in over 200 schools across England and Wales.

In March 2013 CSC launched its first Charity-Public-Private initiative in a ground breaking project to teach 20,000 children how to play chess in the London Borough of Newham. Working with Newham borough council, and East Village, the charity now teaches chess in 14 primary schools in the borough, and aims to extend its programme to the remaining 50. 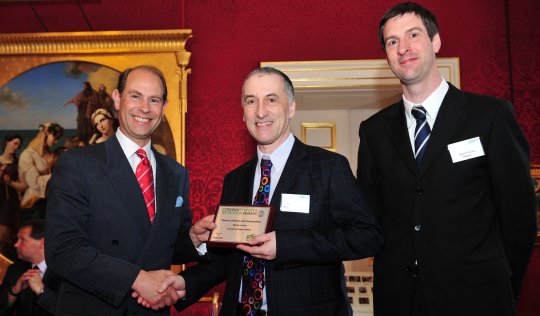 The Earl of Wessex presents the Innovative Project Award to Chess in Schools
and Communities Chief Executive Malcolm Pein alongside, Sam Franks (Hiscox).

Tim Lamb, chief executive of the Sport and Recreation Alliance, said: “This award recognises the blue-sky thinking that Chess in Schools and Communities has shown over the past year.”

“Chess is a cerebral activity and the people behind Chess in Schools and Communities have really thought big to take the benefits that chess brings to thousands of children up and down the country.”

“The judges were amazed at the scale and ambition of the project and it really is an inspiration to all other sport and recreation organisations in the UK”.

“We are delighted to receive this award – it’s proof that chess, the most enduring of games, first played 1500 years ago, remains a fun and stimulating pastime for the young generation, even in the modern age.”

“With the £1000 prize money from the award we plan to give 500 talented young players from deprived areas their own chess set so they can continue to develop their skills.”

“Chess in Schools and Communities is far and away the most important initiative in English chess in the last 15 years. I’m delighted that their hard-work has been recognised outside the chess community and I am sure that this will spur them on to even greater success”.