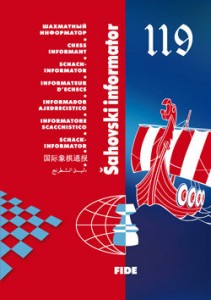 Chess Informant 119 Viking is largely dedicated to the newly crowned world champion, Magnus Carlsen. He’s the emerging global brand and the new face of our beloved game. We offer exclusive Carlsen photos inside Chess Informant 119, but for the cover we preferred the symbolism of a sailing drakkar boat. This newest installment of the Informant is all about red and blue that one can connect with the Norwegian flag, perhaps as additional evidence that Vikings are back in fashion.

Get your copy of Chess Informant 119 Viking with FREE shipping – for 39.90 eur

“Magnus displays will-power, calculated risk and strong nerves to win the Zurich Chess Challenge 2014.” – GM Sarunas Sulskis concluded in his “Interception” column. Sulskis closely follows the new world champion throughout his first tournament as the official king of chess. Our Zurich “insider”, WGM Anna Burtasova, colors heavily annotated games by Sulskis, including the Russian roulette between Carlsen and Nakamura, with interesting sideline notes about the event.

GM Suat Atalik, who sees the Norwegian as a new Fischer, annotates all ten games from the World Championship match Anand – Carlsen in Chennai. After each game FIDE press officerWGM Anastasya Karlovich was the first person who approached the players; just like in Zurich, once again we rely on female sensibility in discovering the spotlights and the photos behind the scene.

If there is a secret in Magnus’s success over Anand, GM Mihail Marin sees it in the new champion’s deep understanding of endings. The “Old Wine in New Bottles” column questions the known aphorism “all rook endgames are drawn”; Mihail analyzes two of Carlsen’s endings from Chennai and makes a parallel with some of the classic examples by Capablanca, Tarrasch and Korchnoi.

Outsiders’ beating the best is a pretty rare phenomenon but this time, at the European Teams Championship, we saw just that. German journalist and author Harald Fietz, our reporter in Warsaw, covers the Russia-Turkey match. All the heroes from the Turkish team (GMs Solak, Ipatov, Esen and Yilmaz) annotate their games in this David vs. Goliath encounter. In the continuation of the story, in his “No Fear” column, young Turkish (Ukrainian-born) star GM Alex Ipatov offers some memorable games that he witnessed or played at the very same event.

GM Rafael Leitao won the Brazilian championship for the sixth time in his career. Still, he used his own success as a mere starting point in his “Bossa Nova” column, modestly dedicating it to the elaboration of an alternative way of preparing for games – one quite contrary to the computer-generated memorabilia attempts.

Legendary American GM Alex Yermolinsky is a welcome new columnist. In “Route 66 Chess” he will be driving over U.S. chess roads, and for the first one he reveals some of the best games from 2013 in his signature style. His choices for the inaugural column include games played by Shabalov, Troff and Shankland.

C3 SICILIAN – BOOK IN THE BOOK

Another new name in the latest Informant is the top Greek player, GM Vassilios Kotronias. Readers will not only find four of his excellent wins from the European Team Championship (in the Games section), but his very special contribution column that will build your complete repertoire in the 2.c3 Sicilian. This is truly a book within a book; Informant 119 is bringing the first of four parts of this original analysis, made by the highly regarded opening expert.

The CI Labs opening section is here as well with two articles, both dedicated to the newest opening fashion: the Sicilian Najdorf [B90] by GM Dimitrios Mastrovasilis and the Semi-Tarrasch Defense [D41] by GM Milos Perunovic.

Chess is a global game! GM Sarunas Sulskis had a very pleasant trip to Iraq (!) where he played in and reported on an interesting but from some reason non-rated tournament, won byGM Sergey Tiviakov. Still another column in Informant 119 leads us to the Far East; Chess Asia by Philippine journalist and author Bobby Ang covers the high-prized Indonesian Open. You will find annotations by the participants GMs Oliver Barbosa and Ivan Ivanisevic, along with an interview with the winner, GM Alexei Dreev.

Are we missing something? Definitely yes! “Garry’s Choice” is indeed missing, but for one reason only: Kasparov’s campaign for FIDE President is underway! After the upcoming elections Garry will be back – that’s his personal promise to all Chess Informant readers.

All the above is in addition to the usual: In the traditional Games section there are 200+ games annotated by the players themselves along with our GM and IM staff. And do not forget to peruse the other sections: Combinations, Endings, and Studies etc.