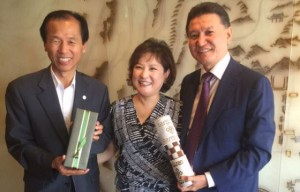 FIDE President Kirsan Ilyumzhinov visited South Korea, the host of the 2018 Winter Olympic Games, where he met Mr. Choi Moon-soon, the Governor of Gangwon Province, President of the Organizing Committee of Games 2018 in Pyeongchang.

The meeting was organized with the active participation of the Korean Chess Federation and its President Ms. Hyun In Suk.

Following up on the recent successful meeting with the IOC President Thomas Bach, Ilyumzhinov informed the Governor about the minimal requirements needed for the chess competitions.

As FIDE reports: “Chess programme does not require the construction of separate infrastructure with its high costs and is notable for its organizational flexibility. At the same time, it can attract attention of a very large audience, especially a foreign audience, this makes it very important for the local tourism industry.”

Mr. Choi Moon-soon was obviously pleased with the presentation and as the Head of the Organizing Committee of the Winter Olympic Games 2018 invited FIDE to participate in the Games as a demonstration sport.

“I am happy that the negotiations with the IOC were successfully completed. I think this is a victory,” – Ilyumzhinov was quoted by TASS.

He added that – “All new Olympic sports, for example curling, were first included in the status of exhibition. This is a required first step.”