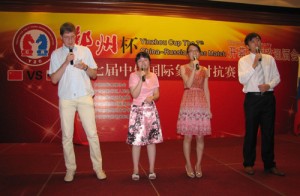 The 2012 match will be a practice friendly between two of the strongest teams in the world and their last check before the record breaking Olympiad in Istanbul. Each team will consist of six people – 5 players and 1 captain.
The tournament format is each plays each (Scheveningen), total 5 rounds of classical chess from the 2nd to 6th of July, additional two rounds of rapid chess will be played on the 7th and 8th. All games will be live on Chessdom.com, while the best examples will be featured at the CEWN pdf magazine.

While the Chinese align most of their top players for the match, the captains of Russia have decided to use the opportunity to check possible options for the 4th and 5th board at the Olympiad. Even so the match is very balanced regarding the ELO ratings. Here are the complete teams of China and Russia.

See the main contenders of Russia and China at the Olympiad men here and women here.