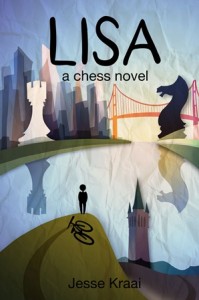 Jesse Kraai returned to chess in 2002, at 30 years old. By studying his own games he was able to reach his goal of Grandmaster in 2007. You can read more about him and his chess novel at jessekraai.com. His novel may be purchased on Amazon, http://amzn.to/1chwP0U

Excerpt below kindly provided by Jesse:

Lisa ditched her last couple classes on Thursday. They were pointless anyway. The shuttle wasn’t there to take her, but it was easy to walk the four blocks to the train-even though they always told the kids it was so dangerous. No one tried to stop her; she was invisible and free.

Lisa had lost to Ruth the day before, once again brutally. And she dreaded her punishment. He’s probably going to make me do something like Bikram yoga, Lisa thought. He’ll turn me into a puddle of sweat.

Lisa wanted to be admitted into the temple, to be accepted and enjoy a warm and carpeted conversation. But Ruth would always squish her. And Igor would never let her in. So she would take her revenge. She would sneak into the Berkeley Public Library without permission.

The outside walls of the building looked like a boy had poured his green Gatorade all over it twenty years ago and no one had ever bothered to clean up the sticky mess. The fungi and bacteria of the street had eaten the brightness away, leaving a matte puke color. But underneath all of that there were outlines of athletic women wrapped in tight cloth, climbing staircases up into the emptiness. The images were faint; the fineness of their lines had been lost.

Inside, hairy men with enormous black trash bags casually dragged their life’s belongings across broad granite floors. The old socks of homelessness pinched Lisa’s nose as she watched a man play blitz chess on one of the public internet portals. This library wasn’t a temple. It was just another adult scam, like the way they used chess to trick kids into concentrating.

Lisa left the library at 3:30, a half hour before she was supposed to meet with Igor. She was sneaky like that; Igor would never know that she had gone in without his permission. Fooling adults was easy. To kill time, she laid herself out on the Peace Wall as Igor had and did chess problems, using the photocopies Ruth had made for her. Then she walked back to the library, as if she hadn’t already been there, to wait for her teacher.

Igor took the record of her game into his big hands and looked down at her with a questioning smile, as if asking, “Have you failed again?” Lisa knew that Ruth had emailed him and described the game. But he needed to see the moves. Lisa had carefully noted on her scoresheet how much time she and Ruth used on each move. She had tried to follow his principles. In his own world, the Russian softly spoke, “tak, tak, tak,” quickly reconstructing the game in his mind to a metronome beat. Then he looked up at the mountain, his big stone, his personal gym. “We go inside,” he said.

Igor led Lisa up to the third floor of the Berkeley Public Library, the children’s floor. He said they would take advantage of Lisa’s age and use the ample space there. From behind a bookshelf of Dr. Seuss and Where the Wild Things Are, Igor pulled out a magnificent wooden set that he had hidden. Until then, Lisa had never played on anything but plastic. Igor told her the history, how he had the set made after he became a grandmaster, to commemorate his passage. He said it was his one item of physical beauty, of decadence.

For his black pieces and squares, Igor had found a block of Indian rosewood, called sheesham, while playing a tournament in Punjab. Dark swirls wound their way through the wood, like a slowly moving mist that covers a distant light. For his white wood, Igor went back to Cuba. He told Lisa about his fateful tournament there, the Capablanca Memorial, and about his escape in Gander. He told her about the need to go back, to play well. There he had acquired a piece of boxwood, as if it were a trophy. To Lisa, its pure and unchanging light suggested truth.

Igor said that he had packed these two tropical treasures into a deep suitcase, neglecting his clothes, and brought them to the Estonian master carver Kalju Muutnik. Kalju’s hands had only ever known the hearty woods of the coldest north, forests reaching back to the time of Neanderthal spears. There in Estonia, Kalju gave the exotic southern woods an Eastern European modesty and grace.