Tromso was chosen as a host city of the Chess Olympiad 2014 during the General Assembly in 2010, where the majority voted for Norway. The final agreement between FIDE and the Organizing Committee was signed 21.10.2011 at the GA ongoing in Krakow.

The agreement was signed by FIDE President Kirsan Ilyumzhinov and the Chairman of the Organizing Committee Herman Kristoffersen in the presence of the General Manager of Tromso 2014 Børge Robertsen, the President of the Norwegian Chess Federation Joran Aulin-Jansson, and the international consultant, Morten Sand.

Herman Kristoffersen commented, “This is an important milestone in the history of the chess Olympics in Tromsø in 2014, now we have the legal basis for a successful event.” 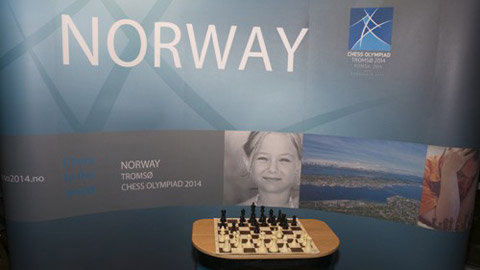 Tromso will host the Chess Olympiad in 2014

The City of Tromsø, at a latitude of nearly 70 °N, is with its 68,000 residents and 10,000 students the largest city in Northern Norway. The city is home to the world’s northernmost university, brewery and cathedral and the city thrives on education, research, administration, fishing exports and satellite technology.

Tromsø is situated a two-hour flight from Oslo. It is known for its great atmosphere and vibrant cultural life and is the perfect place to experience the Midnight Sun in summer and the Northern Lights in winter.

The city’s nickname, “Gateway to the Arctic”, dates back to the 1850s when the city became the centre for Polar sea catches in the Arctic region and later in the early 1900s when it was the starting point for a host of expeditions to the Arctic and Antarctic regions. Despite this nickname, the city has a mild climate, owing to is location near the Gulf Stream.