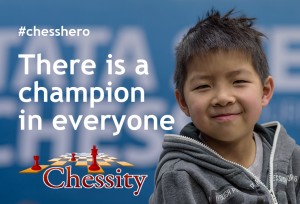 The official opening of the Tata Steel Chess Tournament, Friday January 13th, brought exciting news for chess coaches, teachers and children around the world. 2017 will be the year in which new chess heroes are created thanks to their continued partnership with Tata Steel Chess and Chessity.com.

The platform of Chessity brings teachers and coaches new opportunities to offer all children the benefits of chess. Today, most people – from parents and teachers to neuroscientists – are aware of the fact that chess is a means to let talent blossom in many different ways. It helps children to find their inner champion, even in non-chess-related areas of their development. As an adult chess player, chess coach or teacher, you hold the key to unlock all that potential.

This may seem a tall order. But thanks to modern technology, it isn’t. Teaching chess to large groups of children has become easy and affordable. Chessity takes a leading position in the field of online chess learning, with their success in the Netherlands as a global role model. The revolutionizing chess program is supported by the Royal Dutch Chess Federation and is embraced by rapidly growing numbers of chess coaches and schools.

At the start of the Tata Steel Chess Tournament, Chessity announced their plan to introduce chess to thousands of children all over the world between this year’s tournament and the 2018 edition. Ideally, every child should be given the opportunity to learn chess. And to become a champion in his or her own way. Chessity built the platform to make that feasible. Their partnership with Tata Steel Chess allows them to temporarily lower the price so that as many children as possible can benefit.

Every child deserves a champion

2017 will be a great year of chess for children all over the world. We’ll see new champions and new chess heroes. But it takes us – the adult chess players, coaches and teachers – to inspire the young and give them a chance at chess. Hey, that’s rather heroic, too, don’t you think?

Visit the Chessity “I want to become a chess hero” page