In a special pavilion built for this occasion the World Cup finalist Alexander Grischuk and the two robots – KUKA Monstr (Germany) and CHESSka (Russia), faced off at the chessboard.

First Grischuk tested himself in a fight with a robot. The match consisted of six blitz games. In the first three the Grandmaster was white, and in the beginning he dictated the pace, but he could not break the resistance of his opponent.

In addition, in the third game Grischuk had to search for escape in a rook endgame. 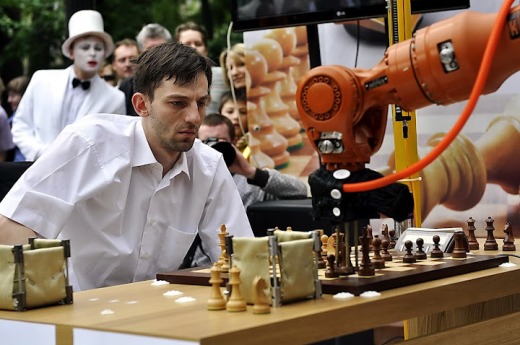 With the score of 1,5:1,5, the colours were reversed and KUKA assumed white pieces. The “metallic mind” took over the initiative and won all three games for the final result of 4,5:1,5.

Then, after a short break, the historic Match for the Title of Absolute World Robot Chess Champion kicked off. KUKA Monstr attempted to take away the title from the current owner – the Russian robot CHESSka.

However, perhaps the German robot was “exhausted” after the clash with Grischuk and a persistent struggle did not happen. CHESSka was faster and more accurate than the opponent.

In prolonged games, KUKA simply could not fit into the allotted 5 minutes per game. As a result, CHESSka robot claimed a convincing victory with the score of 3,5:0,5. 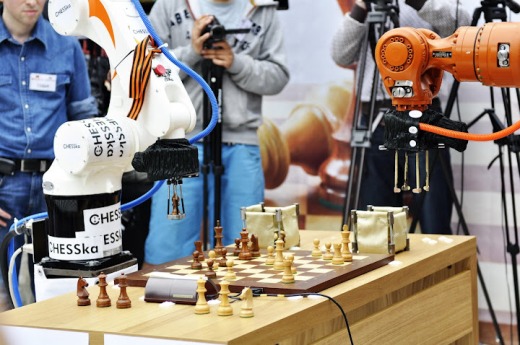 The matches involving robots have gathered a large number of observers.

“The match was exciting, for spectators and for the participants alike, and in the future we plan to hold similar meetings every year” said the Godfather of robot players, the honored coach of Russia, Konstantin Kosteniuk.

The organizers of the event were: Summa Group, the Russian Chess Federation, the Center for Physical Culture and Sports of the Central Administrative District of Moscow, the Chess Club Petrosian, and the company ChessQueen. 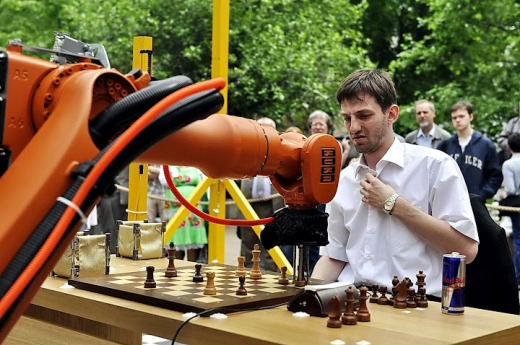