by Peter Doggers
Editor-in-chief of ChessVibes.com

Spanish IM Daniel Alsina pleasantly surprised the chess scene this week by winning the Barcelona GM tournament outright, with a score of 6.5 out of 9. Along the way, Alsina defeated top seed and former top GM Alexei Dreev in one of the Russian’s pet variations.

More importantly, Alsina scored his third and final GM norm, for which only 5/9 was necessary. The young International Master from Catalonia is a physics student at the University of Barcelona but still finds the time to play good chess!

Alsina’s win against top seed Alexey Dreev was arguably his best game of the tournament. He found an important improvement in one of Dreev’s pet lines: the 6…Bd7 Rauzer. This game was played on November 7th, and thanks to ChessVibes Openings its theoretical relevance has become clear already. In this week’s issue #45, as part of the section “This week’s harvest”, the game has been included with the following explanation: 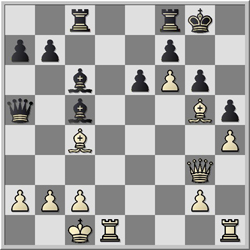 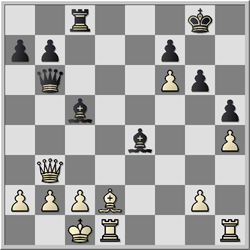 Dreev is mostly known for his Caro-Kann and French, but his 6… Bd7 Rauzer has been another one of his pet lines for many years, and serving him well. This may have come to an end though, since in their race for tournament victory in Barcelona, the young rising star Alsina Leal beat the maestro in the very main line. Firstly, on a side note, 7.Be2!? is a critical alternative, analyzed by Wells to a solid edge for White in “Experts vs the Sicilian”. 8.f4! is the most accurate move order, since 8.0-0-0 allows the exchange sacrifice on c3 two moves later, as was shown in Lopez Martinez-Almeida Quintana from the same tournament. What follows is a series of forced moves up to 18.Qg3!, which is incidentally recommended in the Rybka 3 book. With the novelty 19.Bd2! followed by 20.Bxe6! White improved on the move order, winning the exchange and after a tough battle the game as well. 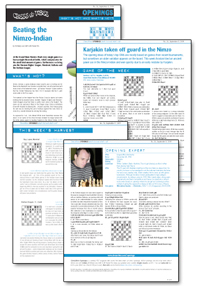 Every issue consists of a PDF Magazine and the accompanying PGN file. The PDF consists of four pages (A4 size) with the following contents:
• What’s hot? A round-up of this week’s important opening developments, with statistics about the frequence and score of the week’s most important opening novelty (page 1)
• What’s not? Which openings are not recommended at the moment, according to the top players? And why not? (page 1)
• Game of the week Each week you’ll find the theoretically most important game analysed by our two IMs, with a detailed survey of the opening phase (page 2).
• This week’s harvest Four more new important opening ideas from this week (page 3) revealed and described with explanation of the opening and early middlegame (page 3).
• Opening expert Every week an opening expert is covered, explaining the GM’s expertise and showing a key game with annotations (page 4). Examples from the first two issues: Teimour Radjabov (King’s Indian with Black), Alexey Dreev (White: Nimzo-Indian; Black: Caro-Kann and Slav).

For more information we’d like to refer to our special page on ChessVibes Openings.