A memorandum of cooperation between Russia and China in scholastic chess development is signed in Shanghai. 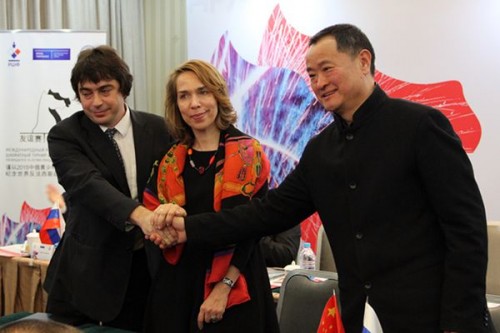 During the opening ceremony of the Russian-Chinese Match of Friendship chess tournament, officials of Russia and China signed a memorandum of cooperation amid the international scholastic tournament Belaya Ladya, the only large scale international scholastic team event in the world. The agreement was signed between Russian Chess Federation, Chinese Chess Association, and Charitable Foundation of Gennady and Elena Timchenko, which supports annual Belaya Ladya events and the Russian-Chinese Match of Friendship. The memorandum was signed by Maria Morozova, CEO of Timchenko Foundation, Yang Junan, president of Chinese Chess Association, and Mark Glukhovsky, executive director of Russian Chess Federation.

According to the document, Russian Chess Federation provides the winner of the Chinese scholastic team championship an opportunity to participate in the Belaya Ladya final tournament, which traditionally takes place in early June in Sochi.

Andrey Filatov, president of Russian Chess Federation, thanked the leadership of Chinese Chess Association. “This is a historic event for Belaya Ladya. Chinese Chess Association pays a lot of attention to scholastic chess development. Hundreds of thousands of young players take part in the qualifying tournaments of the Chinese championship. Inviting such a powerful chess nation as China to our competition is a serious challenge for the organizers and participants of the final tournament. I am very glad that Belaya Ladya continues to expands as an international project. We are planning to increase the number of participating countries in future. This competition not only assist in scholastic chess development, but also teaches children from different countries friendly cooperation and mutual understanding.”

The Russian Chess Federation (RCF) is a public non-profit organization that brings together individuals and chess federations of republics, regions, federal cities, autonomous regions and districts of the Russian Federation. The mission of the Russian Chess Federation is to promote and popularize chess in the Russian Federation. The RCF was founded on February 15, 1992. It organizes the annual Russian Children’s Championship, the White Rook tournament among educational institutions, the Russian championship and other chess competitions. In 2012, the Chess in Museums program was launched in Russia at the initiative of the RCF.