They collected 18 game points and 11 match points, compared to that of 14 and 5 respectively by India, to win the Komati Reddy Prateek Reddy trophy. 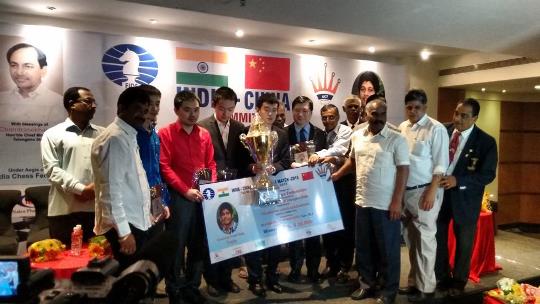 Lalith Babu beat the resilient Zhou from the white side of Queen’s Indian defense in 32 moves. Zhou annoyed by the passer “c” pawn of Lalith, erred and lost a pawn. Zhou resigned when the forced exchanges seem to be fatal. Lalith and Zhou performed evenly by scoring 4.5 points and 4 points respectively.

Like in previous round, the above win was short lived when Adhiban lost to the unassuming IM Chen Wang. The Closed Sicilian adopted by Chen restricted Adhiban from any combinative play. Chen penetrated with his rook along the 6th rank exposing the black king. A couple of inaccurate moves by Adhiban was sufficient to bring down the curtains in 44 moves, thus bringing the match to 1-1. Adhiban has just scored half a point from the last round and had scored 2.5 points from 8 games. Chen’s score of 4.5 out 8 is far better considering his rating.

The four knights game between Wei Yi and Sasikiran was the third game to finish. A safer approach by Wei disallowed Sasi to unleash any tactics despite his Queen and knight being closer to White King. An attack on the f7 square by Wei forced Sasikiran to take a draw by repetition in 44 moves. Sasikiran ended up the event with no wins, scoring 4 draws and 4 losses, a lackluster performance from a player of his calibre. Much was expected in scoring terms from Wei Yi, who holds an impressive Elo rating of 2706.

With the match still tied by 1.5 points each, the onus was on Sethuraman to bring some consolation to the home team. The Zaitsev variation of the Ruy Lopez chosen by Ding Liren allowed less space to maneuver on both sides. At the end of the first time control Sethu missed a tactical shot on the 36th move to get the better of Ding. A rook sacrifice on the g6 square coupled with another piece would have exposed black king enough. An uncompromising attitude by both was a treat to the spectators, with Sethu going for the kill and Ding standing tall in defense. Sethu went for an unsound pawn sacrifice on the 62nd move, instead of going for piece exchange which would have ended in a draw. Ding went up by 2 pawns in the rook endgame and Sethuraman threw in the towel at the end of 74th move. Sethuraman was impressive in his 5/8 and Ding has the similar score for China.