It was down on the beach for the team from China today competing in the Gibraltar Masters of the 2014 Tradewise Chess Festival.

The crisp air and the warm radiant sunshine made it a near-perfect day in Gibraltar today. The team and their coach took some time out on Catalan Bay (the beach below the Caleta Hotel) to enjoy the sunshine just like everyone else participating in the tournament.

All said they were enjoying their time on the Rock both in and out of competition.

2014 is three years in a row in Gibraltar for Chinese player Xue Zhao. Asked why she keeps coming back, Zhao’s answer is swift and sharp: “The Tradewise open chess tournament is the best in the world, especially for the female players. I really enjoy playing here in Gibraltar.”

The chess side of things, she says, is always very interesting. “This year the competition is strong again,” she adds.

But Zhao also likes the fact that there are so many other social events organised during the 10 days of competition including the Master Classes. 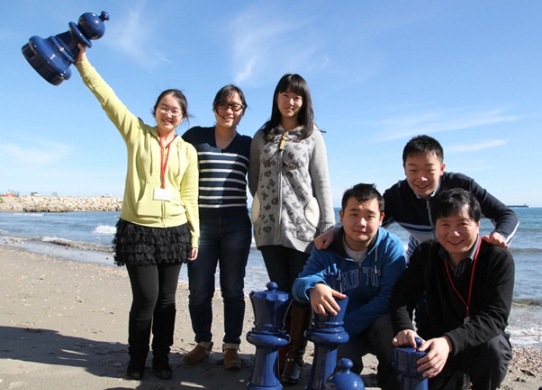 All Chinese chess players know about the Tradewise Chess Festival in China, she says, from the time two years ago in 2012 when child prodigy Hou Yifan, then aged 17, just lost the overall prize against Nigel Short in the final but took the top women’s prize in the tournament.

Guo Qi and Tan Zhongui, first time on the Rock, already know they want to return in 2015. “Gibraltar is beautiful and the tournament is excellent,” they commented.

It is also the first time for Li Chao who heard about the tournament through Xue Zhao. Chao began to play chess at five years of age. “Gibraltar is perfect,” he said, “the weather, the organisation, the food, the tournament, everything, is perfect.”

Looking forward to playing with Vassily Ivanchuk he was hopeful of a good game (note: but he lost, replay here). Like the women, he is hopeful he will return again next year for the 2015 tournament.

The fifth member of the team, and also in Gibraltar for the first time is 14 year old Wei Yi. Their coach Xu Jun is also playing in the Gibraltar Masters.