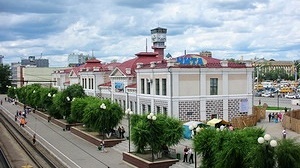 Glukhovsky revealed that the event application from Chita was met with great enthusiasm in the RCF.

“We always want to hold the tournaments in new regions and promote chess across the entire country. Earlier the Superfinals were held in Moscow, but the last two took place in Nizhny Novgorod and Kazan. When we got application from Chita, it immediately fascinated us, and we decided to hold the tournament here. Later we received applications from Yaroslavl and Kazan, but we have already decided about the host.”- Mark Vladimirovich said.

The dates and venue are now set. Moving from the originally scheduled November, the Superfinals will take place between 5-18th August at the complex “Megalopolis Sport”.

Chess boards for amateurs and fans will be set at the Officers’ Club and in chess park. Simuls and promotional events with the Grandmasters are planned in Krasnokamensk, Aginskoe and Charu.

The playing field will be finalized after the Championship Higher League in Kaliningrad.

The Superfinals will be financed by the Russian Chess Federation, the Russian Ministry of Sport and private sponsors.