CHOPIN – the Chess Openings 24/7 online service is a chess opening database for all chess enthusiasts – professionals or amateurs. Officially recommended by the Association of Chess Professionals (ACP), opening lines and articles available at www.chessopenings24-7.com are top-notch: comprehensive, chock-full of new ideas and recommendations, up-to-date and available through your browser at all times. The analyst team’s expertise and commitment are your best guarantee that the analyses and evaluations can be trusted at all times. They are meant for everyone who wants to play openings on equal footing with the best. Juniors, amateurs, pros – the homework is already done, all you have to do is enjoy the game! 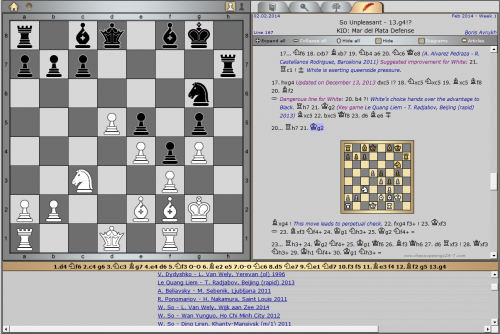 [February 2, 2014] Pick of the Week by GM Boris Avrukh: “So Unpleasant”
Following in the footsteps of GM Wesley So: his favorite set-up against KID

Mostly completed openings are listed below:

In addition to the abovementioned content, new opening lines are published each day during weekdays, and new top-quality opening articles twice a week (“Opening Surveys” column is published on Saturdays, and “Pick of the Week” on Sundays); all these goodies are included in the CHOPIN Professional subscription (monthly or annual) packages. You may find the line and article summaries particularly useful, as they provide condensed information and instant insight into the editor’s choice of most important games and variations. Take a look:

Last, but not least: we firmly believe that it shouldn’t matter whether you come from a nation with rich chess tradition where knowledge and information is readily available; money for expensive coaching sessions mustn’t be a decisive factor; you shouldn’t waste endless hours gathering information just to end up analyzing each move with chess engines – you need a place where everyone should be starting equal. This is why we made the Chess Openings 24/7 online service: a chess opening database for all chess enthusiasts – professionals or amateurs.