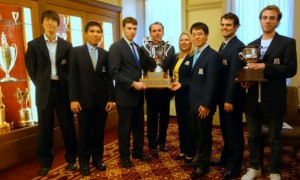 The United States Chess Federation (USCF) has confirmed March 31 – April 13 as the dates for the US Chess Championship 2015. The event is set to be held in Saint Louis and the format is to be announced in the following days.

The dates announced dates created major controversy as they clash with the growing in popularity College Chess Final Four. The top college event is always set for the first week of April, this year the dates are April 3-5. Multiple Grandmasters will have to choose between the two events, eventually weakening both fields.

Paul Truong from Webster University commented, “This means that GM Ray Robson (Webster), GM Alex Onischuk (TTU), GM Conrad Holt (UTD), IM Nazi Paikidze (UMBC), and probably some others, are forced to miss the US Championships or the Final Four… Can you imagine the media nightmare if the dates for the Final Four cannot be changed? Ray Robson, a full time St Louisan of 3 years, and the highest rated American born player in the United States, has to miss the chance to compete in the US Championship to try to qualify for World Cup, through no fault of his own, because someone decided that these are the ONLY possible dates?”