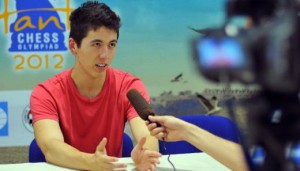 He kindly allowed Chessdom to re-post the entry about the Isthmia Open where he obtained first GM norm.

As a bonus for Chessdom readers, Eric annotated the decisive victory from the final tournament round.

It was a last minute decision for me to play this August tournament as I had been playing tournaments back to back for over a month.

After some pressure from a couple friends, I decided to go to this tournament because it was close to Athens and time needed to be filled before the Istanbul Chess Olympiad.

I decided the day before the tournament started that I was not going to return to school in the fall and instead play a year of chess. It was a big burden off my shoulders!

Well, it turned out to be a very good decision because the playing conditions seemed to relax me right away. The weather was great, it was one game a day, and I had a great social group throughout the event that made the whole thing feel like a vacation.

The tournament started off professionally – I played the first two games against lower rated and won without much difficulty.

The crucial part of the tournament was rounds 3-6 where I was paired up each game against a strong GM. This was a real test of my stability because I never had so many games in a row against that level of competition.

Fortunately, I managed to get good positions in each game as well as manage my clock quite well. The positions for the most part didn’t leave equality much and the right result was achieved.

But holding with the black pieces without difficulties gave me a real sense of confidence since I suffered a few hard losses with black earlier in the summer. 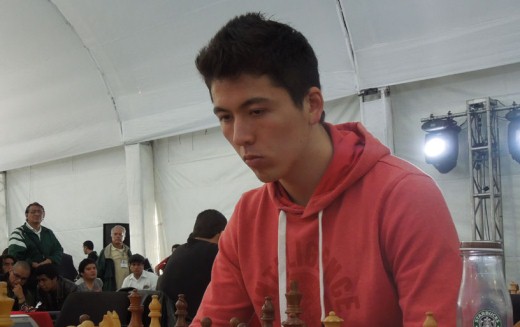 I won good games against an IM and FM in round 7 and 8 which put me in a very good position to make a GM norm. I would need a draw vs Greek GM Ioannis Nikolaidis (2562) as black.

I had never been close to a GM norm before but I just reacted by relaxing as I did every other day. I had come to almost all my games without specific preparation and done well so I decided not to change anything.

I got Nikolaidis to indicate his intentions when he declined my draw in the Anti-Grunfeld opening. He had a reason to play with white and fight for the top prizes.

Fortunately, I had some ideas in the specific opening and got a dynamic position that I felt very comfortable with. He went for a risky continuation and I played pretty well to punish it before finishing the game when he got in time-trouble.

GM norm, 2670 performance, and a big prize for shared first place! It was the highest performance of my career and it put me in very high spirits after this tournament for the upcoming Olympiad a few days later.

I needed a draw in this game to make my first GM norm.

1. c4 Nf6 2. Nc3 d5 3. cxd5 Nxd5 4. g3 g6 5. Bg2
I noticed my opponent preferred this setup. He has a good reason because it is more flexible than normal Grunfeld lines. White will try to provoke some weaknesses before castling or pushing d4.

8. O-O Qd7
The start of an interesting plan with b6 and Bb7 and maybe queenside castling. I also offered a draw here with the hopes that my opponent would be confused and unfamiliar and decide to take it.

13… O-O
I decided not to calculate even though I felt it was objectively best to take the pawn. Some lines were unclear to me and I took the practical decision. White’s space advantage is more symbolic.

26… Kg7
After a bit of moving now black is ready to play Nd6 followed by Bc8-Bf5 with an improvement of his pieces.

29. Qf3 Qc1 30. Rd1 Qg5
Relieving the tension first before turning to the offensive