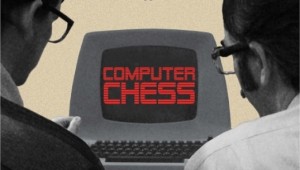 “Computer Chess is a supremely intelligent, beautifully constructed film, interweaving comedy and character, satire and subtext, and loaded with more ideas than some filmmakers manage in a lifetime.” – Time Out

Synopsis: Set over the course of a weekend tournament for chess software programmers circa 1980, Computer Chess transports viewers to a nostalgic moment when the contest between technology and the human spirit seemed a little more up for grabs. We get to know the eccentric geniuses possessed of the vision to teach a metal box to defeat man, literally, at his own game, laying the groundwork for artificial intelligence as we know it and will come to know it in the future.

The film by Director Andrew Bujalski will be screened at 8.30pm next Tuesday 29th July, at The Pickle Factory – located opposite Oval Space at 13-14 The Oval E2 9DT in London, UK.