The CCA General Assembly was held in Cali, Colombia, from July 1st-4th 2015 with the attendance of 27 Federations, either personally or by proxy.

Mr Vega delivered it in writing, reviewing past work done and also analysing the future up to 2018, considering the sporting, financial and political aspect.

The President spoke about the meaning of “adversaries” and “enemies” in his report. Considering the first, he said that those Federations that have another point of view regarding past FIDE elections, deserve full respect and were adversaries no more, now that elections are over. Regarding the second, he said that he defined “enemies” as persons that spread all kind of rumours and lies in order to undermine Continental America unity, just for their own benefit and he said that they must be fought with all vigour.

The President’s report was unanimously approved. 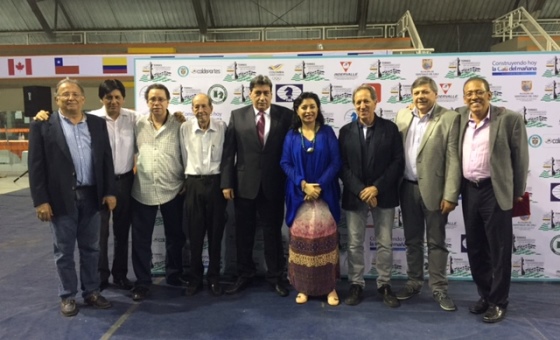 Mr. Makropoulos took the floor and remarked on the need of maintaining a united America, strongly affirming that no FIDE official should intervene in the continental affairs and that the command of America rested with the actual leadership.

Following the comments of Mr. Vega and Mr. Makropoulos, several delegates took to the floor, expressing their rejection of any act that undermined American unity and a proposal was put to the meeting rejecting any action which had the aim of dividing America. The proposal was unanimously approved.

Proceeding through the agenda, the Assembly approved that in 2018, the tickets presented to the CCA governing body for Continental elections must be proposed by five Federation Presidents, in line with similar FIDE regulations for FIDE elections.

A Commission was formed to revise and update CCA regulations, comprising Mr Russell Smith, TRI, Enrique Celi, URU, Pedro Dominguez, DOM and Santiago Garcia, MEX, advised by Mr David Jarrett. The proposed changes would be circulated to all members and discussed in the 2016 CCA GA in Baku, Azerbaijan.

Next, the meeting discussed the granting of the 2017 official events venues, which was carried out in a harmonious and friendly atmosphere as usually happens in these Assemblies. The venues were granted unanimously and the CCA General Secretary will inform members and FIDE in due time.

Last, but not least, the CCA Treasurer, Eng. Allan Herbert, delivered the 2014 financial report and the 2015 budget. The report was self-explanatory and was unanimously approved. Mr. Herbert also announced that although DEV budget was halved this year, this will not affect CCA obligations because our finances are healthy and strong.

Before closing, several delegates spoke about problems in their federations.

At 4 PM on the 3rd of July, the General Secretary declared the 2015 Assembly closed.

Confederation of Chess for Americas report