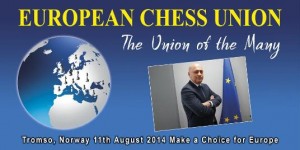 The Continental Presidents will be elected today, right after the FIDE elections. Stay tuned with Chessdom.com for full updates on the race.

Zurab Azmaiparashvili is the new ECU President. He collected 33 votes against only 18 for Silvio Danailov. This guarantees a good sponsorship package for European chess

The ECU meetings continue with individual board members voting

ECU Assembly is on break. Next is voting for 3 individual board members, 4 members of FIDE executive board and Auditor. Many candidates.

Africa Continental elections to take place tomorrow, it is one of the disputed continents.

Lewis Ncube is the Continental President of Africa for the next four years. He won the heated elections process in Tromso today. A total of 40 members were entitled to vote, but 17 delegates possibly aware of the upcoming result, boycotted the meeting and left the hall before the voting.

The final result was 23-0 for Lewis Ncube.