Meeting GM Suat Atalik at the International Open tournament in Paracin was a good occasion to make an attempt in clarifying the complicated situation that arose after the banishment by the TCF and decision of the Greek Chess Federation Board.

Atalik is currently under the fourth ban by the Disciplinary Committee of the Turkish Chess Federation, but this is the first time that his Federation has reached out to the tournament organizers abroad, specifically asking the Golden Sands Open not to pair him or exclude him from the event.

Further, the organizers of the Kavala Open informed Atalik that they are not permitted to accept him in the tournament as per: “The Board of the Greek Chess Federation, in the meeting of 30/6/2012, discussed and accepted a request of the Turkish Chess federation, not to allow the participation of the chess player Suat Atalik in competitions in Greece.”

The first question to Suat Atalik was whether there was an attempt to prevent him from playing in Paracin Open. “Not to my knowledge, I believe the organizer would have told me”. 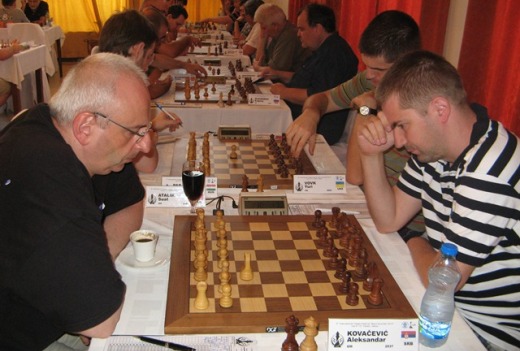 Next we asked him to explain the reasons for all the bans that he received since 2008.

“The first ban of 3 months came in 2008, ironically, for playing in the Greek Chess League. There is the rule that a player has to ask permission from the federation to play a tournament in abroad. This rule is very suspicious for the lack of transparency since there is no clarity about the implications if the TCF board simply refuses to grant a permission and there is no explicit procedure of making such decisions or possible appeals. They can just keep saying “no” and how am I ever to play chess again?”

“In 2009, singing the undertaking was included as the obligation of all players. The document has two parts: first – that a player has to cover all of his own expenses; second – that a player won’t be involved in illegal organizations which are against or not recognized by the Turkish Republic.”

“This paper is humiliating for the players and besides completely unnecessary since there are courts in Turkey where the player may be sued if he would have be involved in any activity against Turkey. Anyway, In 2010 the undertaking was not signed but there were no consequences or bans.”

“In 2010 I got the second ban of 6 months after my speech in the TCF Financial Congress. Speaking of the freedom of speech…”

“In 2011 my wife IM Ekaterina Atalik, also TCF member and former European champion, said that she wanted to sign the undertaking. We discussed this, I tried to convince her not to sign, but of course she is free to make her own decisions.”

“The same year I was sent to the Disciplinary Committee for not signing the undertaking and received another ban of 6 months. I appealed to Tahkim (Council of Sports Arbitrage), and they brought the decree to confirm the decision. This Council is in no way connected to the Turkish Supreme Court.”

“The only parallel is that the decisions of the Council are final and there is no possibility to appeal. The Parliament had the reigning party and opposition joining votes in passing the law to approve this. The reason is to speed up the processes in the cases connected to the Turkish Football Federation, otherwise the football leagues would never start on time! Anyway, it is clear that this Council was established in order to cover up the Sports Federations and make them immune to further court cases.”

“In 2012, the Disciplinary Committee added another ban of 15 months. This makes me the most punished sportsman in Turkey, and not even in connection to doping and game fixing.”

Following the decision of the The Board of the Greek Chess Federation, a heated discussion erupted on one of the most popular Greek chess websites. (Use Google translator to obtain basic understanding).

A source from the GCF explained: “For countries where chess is under national sport law, like Greece and Turkey, it would be very difficult for Greece not to accept the Turkish request, backed by the Council of Sports Arbitrage. Even a diplomatic episode would be possible.”

“We would like to mention here that, the Greek sports law, which is similar to the Turkish sports law, strictly declares that all chess players have to ask for the permission of our federation in order to participate in chess tournaments abroad and immediately after GCF has to ask for the permission of the Ministry of Sports, in order to send players to international tournaments in other countries.

…GM S.Atalik was obligated to inform both our federation and the organizers of the 2012 Kavala open that he is punished by his federation.”

Atalik referred us to the FIDE Handbook, section boycotts:

1. The organizers and the players must be guided by the highest principles of the FIDE Statutes:

1. FIDE is concerned exclusively with chess activities.
2. FIDE rejects discriminatory treatment for national, political, racial, social or religious reasons or on account of sex.
3. FIDE observes a strict neutrality in the internal affairs of the national chess federations.

2. In accord with its Statutes, FIDE reaffirms its commitment to the right to play chess and opposes all organized actions that would hinder that right.

3. It is understood that:

1. An organizer of a chess competition has the right to invite any chess player he chooses. Once an invitation has been issued and accepted, it must not be withdrawn.
2. Each player accepts an invitation only on his own free will but in strict accordance with the statutes and resolutions accepted by FIDE.

As for the similarities between the Greek and Turkish sports laws, Atalik said that “this reasoning is ungrounded and basically wrong.”

“In Turkey a sportsman can be registered with the Sports Federation in two ways: by obtaining an individual license or a team (club) license. In Greece a sportsman can be registered only with a club licence. Now I don’t want to cause problems to my colleagues, but is it allowed by the Greek law that Chess Grandmasters can be members of the foreign clubs and participate in the team championships abroad (France, Turkey, Serbia)?” 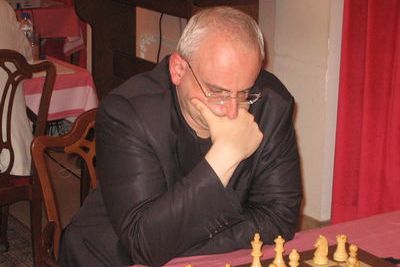 Suat Atalik in Valjevo 2007, where he shared 1st place with Michael Roiz, ahead of Anatoly Karpov

Atalik is also on the list of participants for the Negroponte Open, which will be held in August in Chalkida, Greece. We asked what was the reaction of the organizers in the light of the GCF Board decision. “The organizer, Mr.George Tsounis, said that I am welcome to come and play.”

An interesting fact was revealed in one of our earlier interviews in 2008. Namely, in 1995 Atalik broke the barrier of then poor relations between the two countries as he is the first Turkish sportsman who became a member of the Greek sports club and participated in the Greek League.

In conclusion, Atalik strongly emphasizes that: “Especially the GCF decision is unacceptable and unfair since both federations try to change chess participation rules in international tournaments by their local standards which is against any sports ethics. If one day all these federations try to apply such strategies and bans to suppress their political opponents and run away with it why do we need FIDE and FIDE’s Ethics Committee?”

The Association of Chess Professionals posted on Twitter: “The ACP has just received a letter from GM Atalik, who was banned by Turkish and Greek chess Federations. ACP Board will issue a statement.”

“I will defend my legal rights, and those who know me understand that this means I will push it to the end.”

“I receive strong support from many federations and organizers. People invite me to play in places I have never been before. Here in Paracin I can confirm that we have just agreed that I will play for the local club OSK Paracin in the Serbian League.”