The Russian Chess Federation and ArtRusse, which aims to develop a greater understanding of Soviet and Russian art, have signed a partnership agreement.

ArtRusse’s goal is to bring forgotten and little-known artworks from the period 1917-1991 to the attention of international audience. The Russian Chess Federation’s activities are aimed at popularising chess, as well as developing chess in Russia. The cooperation between ArtRusse and the RCF will allow to pool efforts to fulfill these tasks.

The partnership between the RCF and ArtRusse is a step in the ongoing programme “Chess in Museums”, which was created by the RCF in 2012 and is made possible with support from the Elena & Gennady Timchenko Foundation.

Over the past two years, brilliant tournaments have been held in major world cultural centres, such as the Tretyakov Gallery, the Louvre, the Russian Museum, and the Republic of Tatarstan Museum of Decorative Arts. Cooperation with ArtRusse continues the program to create new ways for popularising chess by uniting cultural and intellectual aspects. 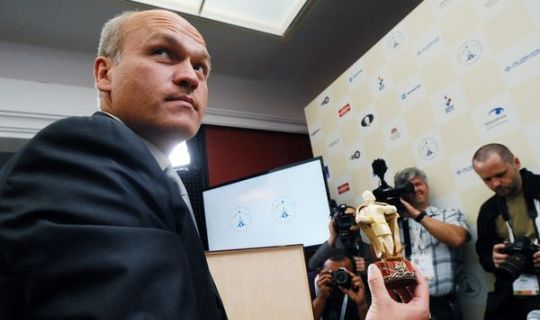 Tens of millions of people all over the world follow chess as a sport. As demonstrated by the programme “Chess in Museums”, introducing chess fans to artworks can expand the audience for both art and chess. This innovative approach of covering chess tournaments has created unique opportunities to popularise Russia’s cultural heritage.

New groundbreaking video broadcasts on the Internet, through a technology developed by the RCF, turn selected significant tournaments into an online art exhibition, visited by over a million spectators from all over the world.

For example, the World Chess Championship hosted at the Tretyakov Gallery in 2012 significantly increased the awareness of Russian art in India.

The Chess Championship of Russia in 2014, hosted at a branch of the Republic of Tatarstan Museum of Decorative Arts in the gallery of the Kazan Kremlin, has stimulated interest in artworks by Nicolai Fechin.

The new agreement between the Russian Chess Federation and Art Russe will allow to develop these initiatives further and increase awareness of chess and Russian art around the world.

Mark Glukhovsky, the executive director of the RCF, says: “The synergetic effect created by the combination of chess and art is demonstrated in various ways – from the expansion of audiences to the creation of new opportunities for both chess federations and museums.. Art Russe and the RCF are determined to further develop this collaboration.”

Information for the media

The Russian Chess Federation (RCF) is a public nonprofit organisation bringing together individuals and chess federations of republics, districts, regions, cities of federal significance, autonomous regions and autonomous districts of the Russian Federation. The activities of the RCF are aimed at developing and popularising chess in the Russian Federation. The RCF was founded on 15 February 1992. The management bodies of the RCF are the Congress and the Supervisory Board of the RCF. The Board of Trustees of the RCF is the collegiate body for deliberation and consultation acting on a pro-bono basis.

The RCF is the organiser of the annual All-Russian Children’s Championship, the tournament “Belaya Ladya” among educational institutions, the Championship of Russia, and other chess competitions. Since 2012, the programme “Chess in Museums” has been implemented in Russia at the initiative of the RCF.

The RCF develops and implements programmes for the development of chess, including chess for children, and assists in expanding the network of chess clubs and leagues in the regions of the RF. It is the organiser of individual and team competitions in Russia, and organises the participation of Russian chess players in international competitions. It assists in strengthening the positions of Russian chess players in the international arena, and develops athletic connections with international chess federations, national and international organisations, including FIDE.

ART RUSSE, led by entrepreneur and philanthropist Andrey Filatov, was founded in 2012 with the aim of developing a greater understanding of Soviet and Russian cultural contributions. In particular, it focuses on collecting and increasing international awareness of Russian art dating mainly from 1917 – 1991. Its aim is to increase appreciation for this genre through exhibitions, lending to international museums and galleries, and publishing books and catalogues on key artists and artefacts.