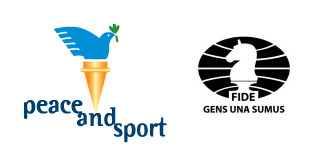 The sport of Chess has many intrinsic values that are very important to build sustainable peace.

Courage, effort, respect for the rules, the opponent and the environment, the acceptance of defeat, discipline, plus the continual quest for progress are all values that Chess can put at the service of vulnerable youth in countries in crisis (situations of post-conflict, extreme poverty or out of social cohesion) to help them build a better future.

In this context, the FIDE has historically developed a number of actions whose primary purpose is empowerment of vulnerable youth and peace-building through Chess.

The FIDE now wishes to consolidate and expand its efforts to put sports at the service of sustainable peace by empowering vulnerable youth in the sport of Chess. It is in this context that a partnership between FIDE and Peace and Sport was signed during the SportAccord convention in 2009.

Peace and Sport and the FIDE

In the context of the contribution that international sport can make to Peace and Sport’s programs for peacebuilding and peace-promotion, several partnerships have been forged with International Federations wishing to put their sports discipline and experience at the service of the most vulnerable communities.

To do this, International Federations intervene very effectively through their national federations who are able to activate their sport as a tool for education about sustainable peace.

Together, these partnerships enable the practice of each sport to be adapted to the reality of conditions encountered in the field. They also facilitate training instructors, equipment provision and help with organizing sports events.

These arrangements are put in place to strengthen the capacity of national federations, enable the transfer of skills to field workers, and ensure that actions undertaken are sustainable.

History of the relationship between FIDE and Peace and Sport

Following the signature of the MOU, FIDE and Peace and Sport have decided to develop a joint program called “Chess for Peace”. This program is composed of peace-building and peace-promotion projects. To date, the following projects have been developed together:

The first pilot project conducted in collaboration between FIDE and Peace and Sport was called “Ajedrez por la Paz” and was launched in Colombia in April 2010.

To date, it’s been helping the reintegration of over 130 children from underprivileged areas through the values of ajedrez.

FIDE was involved in the Urgency program led by Peace and Sport supporting the Haitian Olympic Committee in its program providing structured and supervised sports activities to traumatized children after January 12th 2010 earthquake, which destroyed Haitian capital city, Port au Prince and caused the death of over 250,000 people.

In 2011, Peace and Sport and FIDE joined again their hands to develop a project in Palestine led by the Palestinian Chess Federation with the collaboration of the NGOs “Care Palestine” and “Jerusalem Suburb Communities”.

This program was named “Chess for leadership and creativity”. Its objective was to reinforce women empowerment and leadership using chess as a tool.

Over 200 people, mainly girls, were involved in this program. An evaluation carried out by local stakeholders involved showed that chess had played a major role in the improvement of women lives involved in the project.