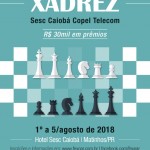 The Copel Telecom Open is a 9-round Swiss tournament taking place from 1-5 August 2018 in Caiobá, Brazil. Players receive 90 minutes for the entire game, plus a 30-second increment starting from move one.
The event will be held in the modern and air-conditioned event hall of the Hotel Sesc Caiobá. 170 players are expected.
Two chess players qualify for the Semifinal of the Brazilian Chess Championship.

Live game with analysis will be provided daily with the best chess software competing in the Top Chess Engine Championship – Komodo, Houdini, and Stockfish