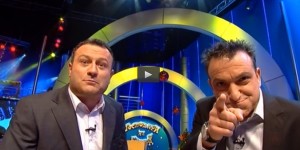 Chess was once again on TV in the European Union, in a central show on Bulgarian television viewed by more than 2 million people. However, this time the news is not positive for the community, as the topic of the report was a scandal concerning election manipulation by the Bulgarian Chess Federation highest officials.

One of the most famous social-political comedy shows in Bulgaria is Gospodari na Efira (directly translated Masters of the Broadcast, or for short “The Masters”), followed daily by 2+ million people. This Monday it had as central topic the election practices in the Bulgarian Chess Federation. In a report titled “How to become a President of the chess federation with illegal moves” the investigating journalist Vladi Vassilev exposed the scheme by bringing in a hidden camera in the BCF offices.

The local Botvinnik Club President – Orlin Nikolov – was promised by the Executive Director of BCF – Nikolay Velchev – supplies for a chess tournament and arbiter positions, only if he votes for the team of Silvio Danailov at the coming elections.

Here is the video of the case, followed by a transcription of the key moments. The video is part 1 of 3, and serves as a preview of the scandal. The second part will be aired on Wednesday, when Nikolay Velchev will be directly confronted by the journalist Vladi Vassilev.

The BCF scandal report starts at min 12:35 into the video, or you can view it at direct link here

Vladi Vassilev: What is the problem and why did you contact us?

Orlin Nikolov: I came to you in relation to one corrupted employee from the Bulgarian Chess Federation. This is the Executive Director Mr. Nikolay Velchev, who now desires to be part of the governing body. He uses his position to extract benefits. To me personally, he offered “material stimuli” to vote for the team that he offered at the General Assembly.

Vladi Vassilev: So you had a meeting with him where he promised you what?

Orlin Nikolov: He promised me an arbiter position at the National Championships (I am a First Category arbiter) and he also promised tables for the club, so that we start holding championships.

Vladi Vassilev: What does he want in exchange?

Orlin Nikolov: He wants us to vote for the team that he points at the General Assembly.

Vladi Vassilev: When will this General Assembly be? 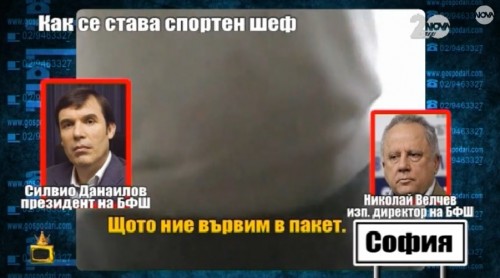 After that introduction Orlin Nikolov calls Velchev to arrange the deal. He is given the five tables to organize a children tournament. Only five because as Velchev says on the phone, “We cannot give you many, because we have given away multiple tables in the same way…”. Orlin Nikolov goes on to retrieve the tables and transports with the help of “The Masters”, who follow closely the whole process.

Having completed the first part of the deal, Orlin Nikolov goes to the BCF offices. This time he carries a hidden camera and records intriguing details.

Orlin Nikolov: Thank you, I received the tables.

Nikolay Velchev: Are you happy?

Orlin Nikolov: Of course, they are great tables!… I wanted to know if Silvio Danailov is the only candidate?

Nikolay Velchev: Yes, so far only Silvio Danailov is a candidate in a team with Mr. Ivan Genov who is CEO of the Atomic Central “Kozlodui”, with Vice President Mr. Nedkov, and of course I am the Executive Director. We are together. If you do not vote for Silvio, then you do not vote for me. We are a package deal… Stefan Sergiev had to be the opposing candidate, he is hesitating. Maybe Kurtenkov can apply… Whoever comes, we have to stand some people who have “done no work”.

Orlin Nikolov: I understand. I wanted to know, if we do not elect the team of Silvio Danailov, the thing that we talked about me being an arbiter…

Nikolay Velchev: … It will not be valid. But I already worked on this topic. I will try to arrange all for you first. We will write you as arbiter eligible for a norm, then we will cover either your hotel or your salary. One of the two, I cannot both.

Orlin Nikolov: No problem, I see that this is investing in the future. My urge now is to start making the tournaments, this is why I needed the tables.

Nikolay Velchev: The important is to elect Silvio’s team. You may not like him because he is not as diplomatic as I am.

With this statement and background laughter ends the intro report. Part 2 will be aired on Wednesday.

See the video on the official site of Gospodari.com where a note below reads, “lately the trend in chess is not to move ON the table, rather UNDER it”.

With the elections for President of the Bulgarian Chess Federation approaching, the corruption allegations against Silvio Danailov and his team are piling up. The reason is certainly not political, as Danailov is the only candidate for the position, rather it looks like a common cry from the local society.

In a country where chess has traditions, clubs as the Botvinnik Chess Club of Orlin Nikolov are lacking common supplies – tables and chess sets. At the same time, the largest national online news portal Blitz.bg reports that a signal will be sent to the Ministry of Sports regarding 900 000 leva (450 000 eur) financial support and the way it has been (mis)used. Among the big questions is the accountability for the European Women Individual Championship in Plovdiv and the private tournaments in Golden Sands and Albena.

Silvio Danailov commented on the signal, “These are not serious statements. The competitions took place, I do not understand what is the problem. The man who gave the signal Stefan Sergiev has received from us a huge amount for book publishing – over 110 000 lv (50 000 eur) in the past 4 years. But I will not say anything bad about him.”

The topic will certainly get hotter after the upcoming Wednesday’s direct confrontation of “The Masters” with Nikolay Velchev.