Magnus Carlsen’s yesterday defeat against Vishy Anand allowed Levon Aronian to grab the lead, while Carlsen is now half point behind on tied 2nd place. Kramnik and Carlsen have played three classical games through 2007, in all of them Kramnik had white pieces, just like today. Kramnik is considerably more dangerous on the white side of Catalan than on black side of Petroff. This fact, however, won’t stop Carlsen to dive into complications.

Around 6000 viewers joined us for today’s broadcast. Thank you!

GM Sergei Movsesian in Corus B and GM Fabiano Caruana in Corus C have secured at least first place tie with a round to go.

Impove your chess skills with the CCA coaches! 16 IM/GM classes for 50 eur signup and info

Read also: Profiles of chess blogs and their authors 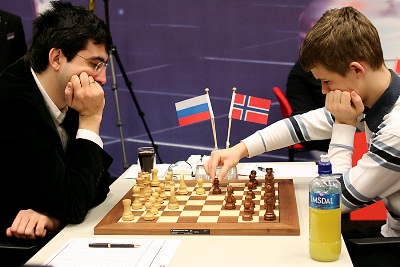