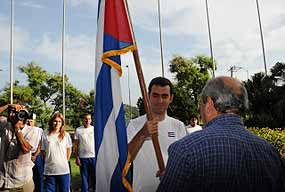 The Cuban male and female chess teams to represent the Caribbean island in the 2012 World Chess Olympiad in Istanbul, Turkey were presented on the 18th of August in the Cuban capital, La Habana.

The World Chess Olympiad will take place in one of the most populated cities of Turkey from August 27 to September 10 with the participation of 160 countries.

Grand Master Leinier Dominguez will once again be the star of the Cuban delegation with current ELO coefficient of 2,725 points.

Cuba has its best performance in the cities of Novi Sad in 1990 and Calvia in 2004, when it got the 7th place in both competitions.

Individually, there are the gold medals won by Jose Raul Capablanca as first player in Buenos Aires in 1939 and the one by Reynaldo Vera as the third player of the Cuban team in Elista (Russia) in 1998.

The female team had its best historical performance two years ago, in the Russian city of Khanty Mansiysk in 2010, when it reached the 4th place, with an outstanding performance by GM Yaniet Marrero as gold medal on third board.