The Asian Zone 3.1 Chess Championships were held in Doha with ten nations in men and seven from women taking part in it.

The players from Iran dominated in general except for Zhu Chen of Qatar who was too strong in the women’s section. Darini Pouria defeated top seed Ghaem Maghami of Iran to finish first with 7.5 from nine rounds.

The event ran from May 4-12, 2013 at Qatar and everything was excellently organised. Dr Michael Shararevian was the chief arbiter. 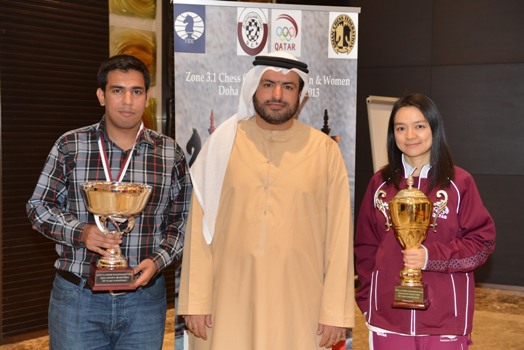 The highpoint was the participation of the Kingdom of Saudi Arabia for the first time due to the special efforts of the Asian Chess Federation General Secretary Hisham Al-Taher.

The women’s event was a triangular contest for the top place. The world women’s champion of 2001, Zhu Chen, drew Hejazipour Mitra and beat the rest of the eight players in a 10-player all-play-all.

Hejazipour ceded another draw with team-mate Ghader Pour Shayesteh and finished second with eight points. Her team-mate finished third with 7.5 points. Rest of the players were behind in the placings chart.

Khalifa Al-Hitmi, President of the Qatar Chess Federation was present at the closing ceremony. Hisham Al-Taher congratulated Qatar for organising the Asian Games 2006 and Pan Arab Games of 2011.