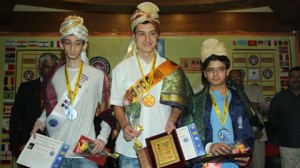 – Hello Dariusz, congratulations on becoming the World Junior Champion! How does it feel to win such a prestigious title?

– Hello. Thank you very much! It’s a great feeling, I am extremely happy with it.

– Last year the Championship was held in your homeland and you took a bronze medal. What was your ambition before landing in Chennai?

– I came to Chennai with target of winning the Championship. I knew that it will not be an easy task but, as I thought, if I took bronze medal last year, why shouldn’t I win the Championship this year?

– Being only 17-years old, you can still compete in the Junior events. It might be too early to ask, but would you defend the title in the next year Championship?

– I think it is too early to ask such things :) It is very hard to build a calendar of starts one year ahead. Of course, I will consider it, but I don’t know yet.

– We know that you work with GM Sulypa for awhile already. Can you reveal some of the routine of your preparation for the WJCC?

– That’s right, I work with GM Sulypa but before Championship I worked also with GM Artur Jakubiec and GM Bartosz Socko. Well, I played two control tournaments and I was mainly analyzing my games from those tournaments. I was also doing some tactics and opening analysis.

– Chess players are known to be night birds, but last year you told our contributor GM Alex Ipatov that you go to sleep early. Is this still the case?

– Yes, it is. In Chennai I also have been going to sleep quite early – about 22:30-23:00. I think that correct tournament regime is very important during the tournaments.

– Chess is gaining on popularity in Poland. Do you think that your success can be a strong incentive in this direction? How did the press cover the Championship?

– I hope that my success will encourage young Polish players to take up chess more seriously. To tell you the truth, the press writes about my Gold Medal a lot. I was also shown with medal at Polish Television.

– What is your favourite game from Chennai?

– My favourite game from Chennai was a game against Samvel Ter Sahakyan in 12th round. It was played very sharp opening and the position was very complicated. We played on very short time. At one moment, I took the pawn and I went to an endgame Q+R. I exchanged then queens and transposed to completely winning rook endgame which I won. Maybe this game wasn’t at 100% played correctly, but it was very interesting; both sides showed very big fighting spirit.

– What are your plans in the future? The next tournaments?

– My next tournament will be Open de Sants in Barcelona. After that, I will have much time for training which I hope will percentage in the future. I would like to thank all my sponsors: Microsoft, who helps me since 2010; Comarch, who is the sponsor of the new project in Poland named “Wojtaszek Comarch Team”; Intel, the technological supporter and my club Polonia Wrocław, who helps for many years.

– Thank you for the interview and best wishes for the future competitions.

– Thank you very much.