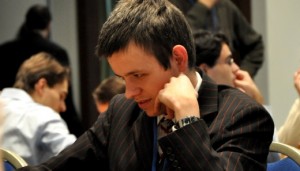 The game started with a Sicilian Defense where Navara, playing Black, chose to avoid the very main lines in order to try to outplay his opponent slowly in a positional struggle. However, Mammadova demonstrated that she was well prepared and played actively. The Azerbaijani had a slight advantage throughout the game, but Navara proved to be a good defender and simplified the position to a drawn 4 v 3 rook endgame.

Another surprise was the victory of Ukrainian IM Bogdan Borsos (226o) over the Chinese GM Xiu Deshun (2530).  The 46 year-old Ukrainian profited from a blunder made by the Chinese on move 30.

The recent winner of the International Blitz Championship in Paris, Maxime Vachier-Lagrave, is also having trouble to get a win today. His opponent, IM Bjorn Thorfinnsson, has taken the game to an opposite-colored bishops endgame. The French super-GM will have to work hard and get lucky to get a full point in this round.