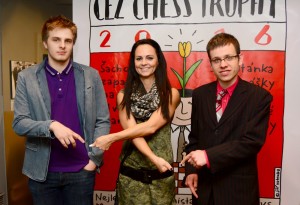 The chess match between the World Junior Champion Richard Rapport and the best Czech chess player David Navara will be the main event of this year’s CEZ CHESS TROPHY 2016, which will be held in Prague from the 3rd until the 8th of June. The grandmasters will be competing in a match of 4 standard games in the classic tempo (counted to ELO) and the match will be commentated on by experienced GMs. The festival will be accompanied by a rich programme (blindfold chess, living chess, simuls, talks, exhibitions and a Chess Train movie premiere).

Carlsen – Karjakin: Get ALL games of Carlsen and/or Karjakin in 2016 with GM commentary in Chess Insider Carsen Karjakin 2016 (pdf and pgn)