All four games of the 11th round of the FIDE World Candidates Tournament ended in draws.

The first to split the point were former World Champions Vladimir Kramnik and Viswanathan Anand. Peter Svidler and Levon Aronian, Dmitry Andreikin and Shakhriyar Mamedyarov, followed the suit around the first time control.

Sergey Karjakin was pressing for a victory against Veselin Topalov, but the Bulgarian was alert to parry all the threats. 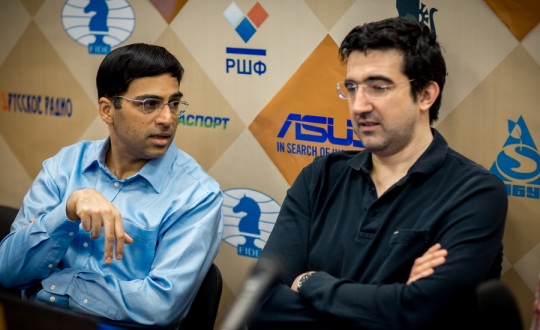 Possibly the toughest challenge for Viswanathan Anand in the last four rounds was the game with black against Vladimir Kramnik.

It wasn’t a great surprise that Kramnik opened with the Catalan, which brought him so much success in the past.

The line with 7.Ne5 is considered innocuous, but Kramnik wanted to play something that he is familiar with. In an over-the-board inspiration he decided to go for the rare 11.Na3, which he analysed some years ago.

Anand continued in the regular manner, by quickly advancing the c-pawn to clear the files and achieve counterplay with heavy pieces.

A temporary pawn sacrifice helped black to clear the queenside and reach an easy draw.

The game between Peter Svidler and Levon Aronian started as a Reti but soon the pawns were arranged in the shape of Slav Exchange variation.

Black solved the problem of the light-squared bishop and this helped him achieve good play on the queenside.

The structure was symmetrical but there were still plenty of resources for either player.

Svidler marked 22.b4 as a mistake after which black succeeded in trading the heavy pieces on the c-file. Both players agreed that 22.Rc2 was a better try, when black would probably start preparing a break with e5.

After the queens went off, draw was signed on move 33. 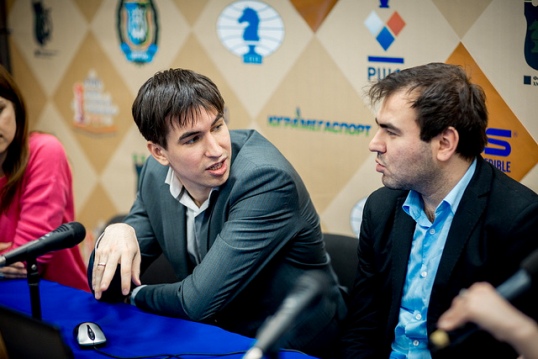 Dmitry Andreikin and Shakhriyar Mamedyarov also explored the Catalan opening. White inadvertently followed in the footsteps of former World Championship Challenger Boris Gelfand, but already by move 20 he was down to less than half an hour on the clock.

Andreikin admitted that he was surprised in the opening and had to spend lots of time to find the best moves.

White made a break by advancing c4-c5, but black exchanged all the pawns on the queenside. On a positive note, white obtained a pair of bishops.

The resulting endgame 2B vs B+N and four pawns on the same flank should be equal, but still some precision was required from black.

Mamedyarov recollected that Kramnik and Gelfand held similar endgames, but he didn’t feel entirely at ease in today’s game. Nevertheless, he managed to trade more pawns and draw was finally agreed on move 46.

Veselin Topalov and Sergey Karjakin played the Double Fianchetto Hedgehog, following for a while their earlier game from 2012 World Rapid Championship.

Topalov was the first to deviate by advancing his pawn to g5. In the battle for the long a8-h1 diagonal both players maneuvered their queens to the corners of the board.

The queens and three pairs of minor pieces were soon exchanged. Black tried to create an outside passed pawn on the h-file, while white concentrated his efforts on breaking through on the queenside.

While white was throwing his pawns forward, black seized the opportunity to trade a rook for the bishop and doubled passed pawns on the a-file.

Despite being an exchange up, white remained passive because black always threatened to advance the passers.

Eventually white stopped both pawns with his king and rook and black couldn’t find a way to activate his own king to make a decisive impact on the final outcome. Draw in 57 moves.