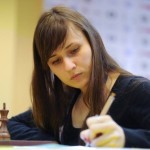 The 15th International Chess Festival Mediterranean Flower 2015 took place from 1st to 7th March, 2015, at the Chess Club Rijeka, in the splendid city of Rijeka, situated on the Adriatic Coast of Croatia.

The tournament was organized by FM/ FT Ivan Mandekic and Chess Club “Draga” under the auspices of the Mayor of Rijeka, Vojko Obersnel, the Mayor of Primorsko-Goranska Region, Zlatko Komadina, and the President of the Croatian Chess Federation, Josip Leko.

The event was a 10-player female round-robin tournament with time control 90′ + 30″.

Third place was shared by WGM Mirjana Medic (Croatia) and WGM Karina Ambartsumova (Russia) on 6 points each, but Medic prevailed on a superior tie-break score and finished third.