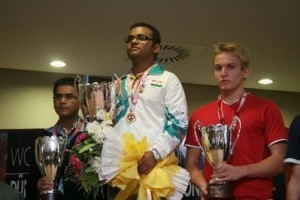 Grandmaster and former World junior champion Abhijeet Gupta starts as the top seed and hot favorite in the premier event of Delhi International Chess Festival that gets underway from Saturday.

A record breaking over 700 participants have registered for the biggest ever prize money tournament of the country, that started 12 years back.

The premier event has just over 100 participants which makes it one of the strongest tournaments with participation of over 50 titled players. “This has been done to make the tournament norm-friendly for Indian participants”, said Mr. B S Chauhan, Organising secretary and also secretary All India Chess Federation.

The premier event will see some of the best players from India participating for a total prize purse of Rs. 1. 25 Million. After Abhijeet Gupta, the presence of Abhijeet Kunte, B Adhiban, P Magesh Chandran and Commonwealth champion M R Lalith Babu will be seen in action spread over ten rounds.

The local challenge will be spearheaded by Grandmasters Sahaj Grover and Vaibhav Suri apart from Tania Sachdev who had a very successful stint recently in a match where she played against great masters of the past.

The premier section will see Grandmaster Aleksej Aleksandrov of Belarus in action as the second seed and Andrey Deviatkin of Russia, Czebe Attila of Hungary, Raset Ziatdinov of United States, Henrik Teske of Germany, Marat Dzhumaev and Dmitry Kayumov of Uzbekistan will make the tournament extremely competitive.

“I believe that the time has come to divulge towards International Festivals of this kind, we have players from over 12 countries and many foreign participants in the very strong premier section while there will over 600 participants in the other two sections. This not only gives a chance to players to compete with the best but will also help to nurture those in formative stage to learn from the masters by watching them live in action”, Mr. Chauhan noted in a pre-tournament chat.