The second half of the six-player double round robin began today in Biel. Ding Liren won his game over Alexander Moiseenko to get sole second place, one point behind leader Etienne Bacrot. This result was specially important given that Moiseenko is a direct contender for first place after his performance in the first half of the event.

The two other games finished with split points. Richard Rapport and Maxime Vachier-Lagrave played a lively Sicilian, while Etienne Bacrot and Ian Nepomniachtchi explored a theoretical line of the Gruenfeld that led to a massive set of exchanges and a peaceful endgame. Tomorrow will be a rest day in Switzerland.

The decisive game of the day was a long affair full of maneuvers. Alexander Moiseenko created a Stonewall pawn structure with the black pieces and suffered through the increasing pressure exerted by Ding Liren. The Chinese demonstrated very instructively how to take advantage of having a good bishop. He will face his direct rival Bacrot with the white pieces in the next round.

The game saw Ding spoiling his pawn structure in exchange of activity with his good light-squared bishop. Moiseenko kept his solid structure but had to take all the tactical shots set up by his young opponent. The kingside pressure over the open g-line increased move by move and, when time trouble began, black faltered allowing his rival to penetrate decisively on his camp. The Ukrainian resigned when white’s advanced passed e-pawn was clearly unstoppable. 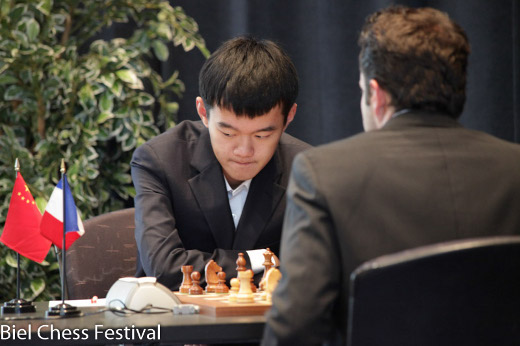 Richard Rapport is not having a good event in terms of results, but he is clearly showing fresh ideas that entertain the spectators and create new challenges to his opponents. Today, he drew his game with white against Maxime Vachier-Lagrave. The Frenchman is still in contention for first place three points behind the leader.

Vachier-Lagrave played the Sicilian. Rapport quickly exchanged the light-squared bishops and advanced his pawn to e5 in order to clarify the pawn structure. The Hungarian followed with a rook lift to the h-file and very active piece play on the kingside. His French colleague played a timely f5 and put out the fire around his king. Even though he was one pawn down, his active heavy pieces gave him more comfortable play. When the queens were exchanged, the players decided it was time to shake hands and split the point. 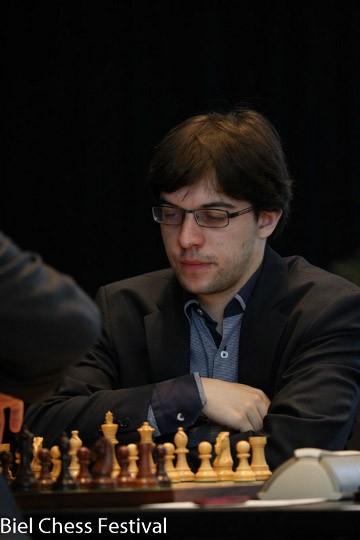 Leader Etienne Bacrot did not have much trouble in drawing his game against the Gruenfeld set up by Ian Nepomniachtchi today. Both players proved they have prepared this opening heavily. It took them 38 moves to reach a completely equalized opposite-colored bishops endgame.

Bacrot used the Classical 8.Rb1 line and his rival answered with the capture on a2. When it was clear that none of them obtained an edge in the opening, the simplifying process began. A threefold repetition sealed the deal and left the French GM at the top of the standings. 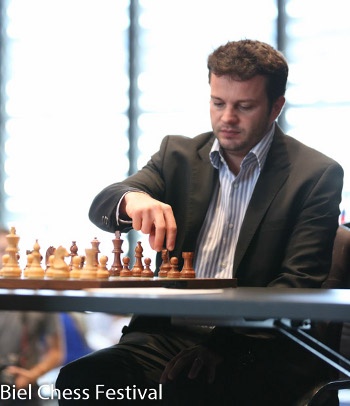