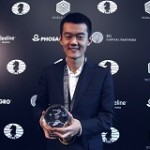 Since the accidental fall in Norway on May 31, the Chinese number one and the World Cup runner-up Ding Liren temporarily stopped the international chess with the rating of 2800 points. The doctor recommended a recovery time between 3 to 6 months, for which he had to give up a series of competitions such as the Ningbo TV Fast Game, the Czech Navarre Match and the National National League.

Recently, Ding Liren, who is recovering his body in Wenzhou’s home, revealed his current situation through an online interview.

“Be patient, hold on for a while.” Ding Liren’s sentence is like saying to himself, but behind the words is full of resentment. “I didn’t realize it when I was in the next game, but after a period of rest, I am more eager to participate in the competition.”

For players like Ding Liren who love to play chess and are in the critical upswing of their careers, it is a bit tormented to be unable to participate in the competition for several months. In order not to let him fall into the root of the disease, Ding Liren’s family and the coach of the Zhejiang team hope that he can rest for a while. After all, the bones hurt for a hundred days, and the bone injury needs a long recovery period. However, he himself is already “free”.

Ding Liren revealed that he is going to return for the match against Topalov in his hometown of Wenzhou from August 10th to 14th, and he also has confirmed that he will represent the national team to participate in the chess Olympics held in Batumi, Georgia in September.

Ding Liren maintained a record of 78 consecutive undefeated games in the game before the injury. The last time in the slow game, the game went back to August last year. With such an impressive record, Ding Liren’s grade points rose to 2797 points, approaching the 2,800 mark.

But when talking about how he thinks about the grade points, Ding Liren said: “The impact of 2800 points on me is not so big. Maybe I have been too shy to talk about my ambitions, or I don’t particularly care about this rating.

The 25-year-old Ding Liren did not like to set goals for himself, but he made up his mind to continue to take the road of chess. Many of the friends in the previous circle chose to retire and found another way, but he still firmly pursued his dream. “Always participate in high-level competitions, so that the level can be stabilized at a high level, and the results may come naturally.”

Chatting from football to the National League

As a sportsman, the World Cup is a game that Ding Li will not miss. He laughed and said that he was a fake fan: “The original support was for Italy, and later briefly supported Argentina, now it is purely ‘eat melons’.”

Speaking of the league, Ding Liren talked: “The Chess League is a football league. The football league is well developed because there are many football fans. Every weekend the fans watch the ball and support their favorite team. This is for them. It’s like a habit. The meaning of the existence of a chess league may be the same. Although there are still so many fans concerned, I think its existence is to give chess fans a look and thoughts.”

The third leg of the National Chess League has just ended in Jiaxing. Ding Liren, although unable to personally go into battle, is still eager to pay attention to the progress of the game. Under the leadership of Ding Liren, the Zhejiang team is very aggressive in the league this year. Although it is temporarily impossible to go to the scene, Ding Liren will still encourage the players in the WeChat group of the Zhejiang team, and also assist the coach to lead the formation.

Let us hope that Ding Liren will recover soon and come out again to bring more breakthroughs and excitement to Chinese chess!