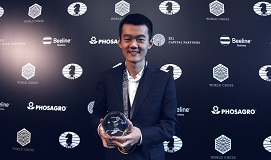 With a win in the final round on Sunday, Ding Liren of China clinched the Moscow Grand Prix. Ding finished with 6 points, half point ahead of Shakhriyar Mamedyarov of Azerbaijan. Ding and Mamedyarov had led the tournament since Round 4.

Ding beat Boris Gelfand of Israel and he did it with the Black pieces. The game was more or less even – though Ding had some pressure – when Gelfand decided to sacrifice a piece for a couple of pawns on his 20th move. The sacrifice was not sound and Gelfand followed up several moves later by desperately sacrificing an exchange in an effort to advance his c-pawn. The second sacrifice was no better than the first and Ding gradually consolidated his position until Gelfand resigned.

Mamedyarov’s game against Maxime Vachier-Lagrave of France was much quieter and the players drew in a symmetrical position after 26 moves.

The only other decisive win of the round was Ding’s compatriot, Hou Yifan, who beat Ernesto Inarkiev of Russia after Inarkiev a complicated but equal game in time pressure. It was Hou’s third victory of the tournament and put her into a seven-way tie for third.

Most of the other games in the finale were relatively short draws, with the exception of the game between Hikaru Nakamura of the United States and Peter Svidler of Russia, which ended after 35 moves with Svidler holding a slight edge and the game between Anish Giri and Alexander Grischuk, where Russian player had good chances to win. Nakamura, Svidler, Grischuk and Giri were among the group of seven players who tied for third.

The Moscow Grand Prix was the second in a series of four tournaments. The top two finishers will qualify for the Candidates tournament next year to select a challenger for the World Championship.

Twenty-four of the top players in the world are competing in the Grand Prix, with 18 playing in each tournament. (Each player competes in three of the four competitions.)

The Moscow tournament was held in the Telegraph building in central Moscow, a landmark building that is steps from the Kremlin. The Telegraph was also the site of the 2016 Candidates tournament.

The series is sponsored by Kaspersky Lab, the global cybersecurity company, PhosAgro, a giant Russian fertilizer company, and EG Capital Advisors, a global financial management company. Each tournament has a prize fund of 130,000 euros.

The series is organized by Agon Limited, the commercial partner of the World Chess Federation, the game’s governing body. All the games are broadcast on WorldChess.com, the official site of the World Championship.

After two stages of Grand Prix Shakhriyar Mamedyarov is leading in overall Grand Prix Series with 280 points, Ding Liren is on the second place with 240 points. Alexander Grischuk and Maxime Vachire-Lagrave share the third place with 211,4 points.