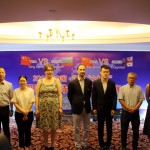 Chinese no. 1 Ding Liren returns after injury in his home city of Wenzhou with a 4-game match against former World Champion Veselin Topalov from Bulgaria. The match is accompanied by a match between former Women’s World Champion Tan Zhongyi and Nana Dzagnidze from Georgia. The time control is 90 minutes for 40 moves, then 30 minutes to the end of the game, with a 30-second increment from move 1.

On the morning of August 15th, the “Heart Bridge Cup” China·Wenzhou Chess Grand Master Contest Closing Ceremony was held in Wenzhou Huaqiao Hotel.
In yesterday’s decisive round, Ding Liren defeated Bulgarian top player Topalov and won the men’s victory in this match with a total score of 3:1.
This is the first time Ding crosses the 2800 barier. His run is already more then one year since he lost competitive classical game.

In the womens match Tan Zhongyi defeated Georgian Dzagnidze and won the championship with a 3:1 record.

Agdestein,Vorotnikov,Burchardt and Gaprindashvili are the winners at European Senior Chess Championship 2018
Dubov wins the 25th Abu Dhabi Masters 2018
To Top