Cuban Grandmaster Leinier Dominguez improved his ranking after defeating Vassily Ivanchuk in the third round of the Thessaloniki Grand Prix.

Ivanchuk lost on time failing to execute the last 40th move. Dominguez was ready to repeat the moves but there was no time to claim a draw. Read more below.

The remaining games were drawn and five players continue to share the lead.

Gruenfeld Indian defence is the favourite opening of both players and it was very interesting to follow how the theoretical battle will develop.

Svidler used the early 3.f3, which is nowadays a popular option for the players who also did some research on the Saemish King’s Indian. The Russian himself faced this system with black on several occasions and this morning he was going through the notes trying to find some way to surprise Caruana.

The curious fact is that the same actors already contested this line in the Tashkent Grand Prix, only with reversed colors. Svidler played a slightly different move order, forcing white’s advance d4-d5, and the game was eventually drawn.

White employed the new direct approach that was introduced by Grandmasters Jones and Sanikidze, but black improved on the move order and maintained the balance.

Svidler pushed the passed pawn all the way to e7, but there was no way to promote the Queen as Caruana forced repetition of moves. 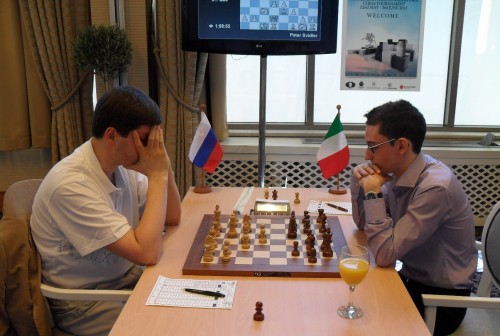 Morozevich’s games are always enterprising and this was no exception. It started as a King’s Indian defence and after white’s early h3 black decided to steer the play into Maroczy structure.

Morozevich didn’t wait long to become original as his Nbd7 and b6 allowed Kasimdzhanov to shuffle the Knight to the dominant d5-square.

After white’s 18.b4 black decided to “sacrifice” the dark-squared Bishop for the Rook on a1. He proceeded to kick the Knight from d5, albeit at the cost of weakening the d6-pawn, and pushed a5 in order to open some files for the Rooks.

Despite the material advantage, Morozevich said later that he was not happy with his position and that he is worse. White had active pieces and a potentially strong pair of Bishops.

Black returned the exchange in order to activate the pieces. White was still slightly better but he missed the right moment to push f2-f4 and black managed to liquidate to an equal Rook endgame. 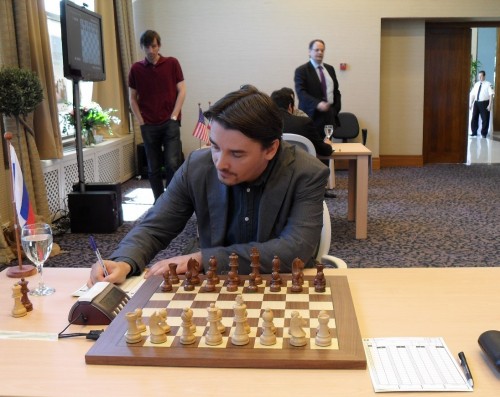 Kamsky was not in the mood to contest the theoretical lines of the King’s Indian or Gruenfeld defence and instead opened with his pet London System.

This is a quiet opening but it can turn to be very dangerous for black if he is not careful. This is exactly what happened in the game after Grischuk’s 10…b6. Later in the press conference Sasha expressed dissatisfaction and said “I played the opening like a complete beginner.”

The annoying 11. e5 forced black to lose some time to regroup the pieces, while Kamsky amassed his forces on the kingside.

The American champion obtained solid advantage and continued to impose threats around the black King. Grischuk urgently sought counterplay on the other side of the board.

At one point, instead of delivering a deadly sacrifice on f7, Kamsky played the slower 27. f4, allowing black to complicate the matters with a nice tactical sequence. White was still somewhat better, but his King was also pushed for a walk to the center. In addition, Kamsky had around one hour on the clock, while Grischuk had to make the remaining eight moves in 36 seconds.

A small reminder that there is no increment before move 60.

Kamsky felt that the opportunity was gone and didn’t want to take risks anymore. After the perpetual check the game was drawn on move 37. 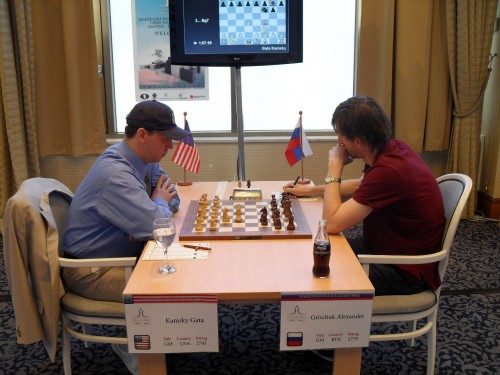 As expected, Dominguez defended with the Gruenfeld Indian defence. He admitted that sticking to the same openings over the years made him some sort of the sitting duck for the opponents’ preparation, but he also pointed out that he has gained huge practical experience and that he is very confident with his repertoire.

Ivanchuk entered the old main line with Bc4, Ne2, but then he varied with the rarely seen 10.Rc1, most recently played by Morozevich. Dominguez deliberated about 10…cxd4, but eventually went for 10…Qa5.

Dominguez later said that he should analyse the opening and find an improvement instead of 17…Rfe8.

Ivanchuk applied consistent pressure on black’s position and soon his advantage was decisive. But in time trouble the Ukrainian blundered and allowed black to come back to life.

Another mistake followed as white left the Knight en prise, but Dominguez didn’t want to take it and instead attempted to make a draw by perpetual check.

The Cuban explained the motives for this act. In Linares 2009 he and Ivanchuk run into huge time trouble and in all the speed the Ukrainian was knocking some pieces down. It wasn’t anything drastic and Dominguez didn’t object. After the time control Ivanchuk emerged with a winning position but he immediately offered a draw because he felt bad about the knocked pieces.

In today’s game, however, Ivanchuk failed to reach the time control and his flag dropped before the last move. As draw offers are not allowed, Dominguez had to wait for the three-fold repetition to make a claim, but this never occurred. He still tried to register the game as a draw, but the Chief Arbiter had no grounds to accept as the flag already fell.

Dominguez said he is very sorry that he couldn’t return the favor in fair-play. 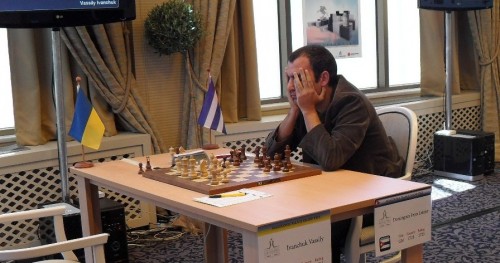 The match started with a sharp line of the Naidorf Sicilian, where Topalov pushed early g7-g5, as his second Cheparinov did some years ago. The Bulgarian improved on the earlier games with the “ugly” but practical 12…Qe7, solving the development of the light-squared Bishop.

An interesting pawn structure emerged on the board, with locked horns on the kingside and doubled black pawns controlling all central squares.

Ponomariov decided to break through with h3-h4, but Topalov grabbed the pawn and held on to it for the rest of the game.

The heavy pieces went off the board while Topalov regrouped to strengthen the passed pawn and try to push ahead.

However, white was able to cover all the entry points on the queenside and to successfully block the h-passer. Draw agreed on move 56. 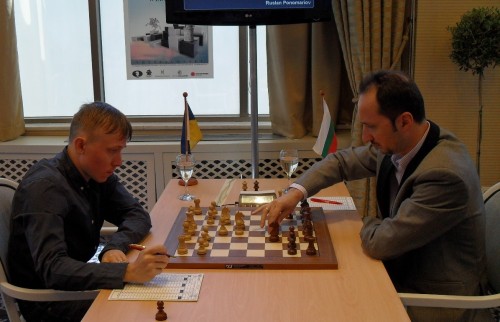 For the third day in a row Nakamura played the longest game of the round.

The opening was a quiet Bishop’s Game with an early 2.Bc4. The game was equal throughout and the commentators didn’t pay much attention to the slow maneuvering.

But at one moment all the other matches finished and we gave a closer look to the equal but interesting Queens’ endgame.

The followers of the live broadacast received a valuable lesson on pawn endgames by GM Halkias and FM Logothetis.

The Queens were never exchanged though and the game ended with perpetual check. 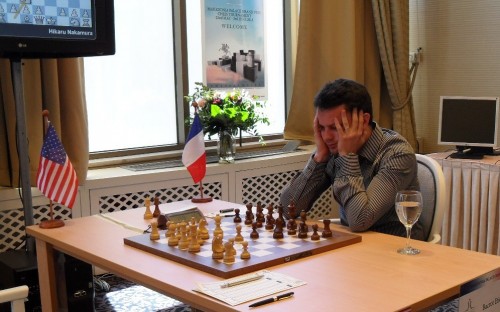