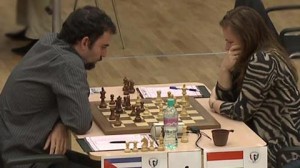 Judit Polgar stays in the competition for the World Cup after beating Leinier Dominguez with black pieces to equalise the score 1-1. But the victory did not come easy as she had to convert the notorious R+B vs R ending into a full point.

Many years considered as a theoretical draw, the endgame is nowadays known as winning with precise procedure when the “weaker” King is on the edge of the board.

Polgar had a good start as when she captured the remaining pawn on b3, the White King was already cut on the a-file. However, she shuffled around for a while trying to find the exact pattern.

This could have cost her dearly as she allowed a three-fold repetition! But Dominguez returned the favour and on his turn missed to claim a draw. (Replay through the annotated game and compare the positions after White’s 95th, 105th and 107th moves).

It is possible that being in time trouble Dominguez didn’t even track the repetitions and tried to survive long enough to claim a 50-move draw (which should come on 130th move). Or he wasn’t sure if the repetition occurred as per the rules (with the same player to move etc).

Once the opportunity is gone, the player can’t claim retroactively.