GM Alberto David (Hotel Livigno) has won the 3rd International Livigno Chess Open. The Italian player got the upper hand during the last round against Martyn Kravstiv (Ukraine) and thus finished on same points as Ognjen Jovanic (Hotel Astoria – Croatia) and the Ukrainian Yaroslav Zinchenko (Hotel Alpina). Buchholz has been taken into account, giving the 1st prize to David for only half a point.

Eighth place is for Kravstiv who made better than Tomas Polak (Hotel Galli, Czech Republic) and Igor Naumkin (Hotel Astoria – winner in 2010). 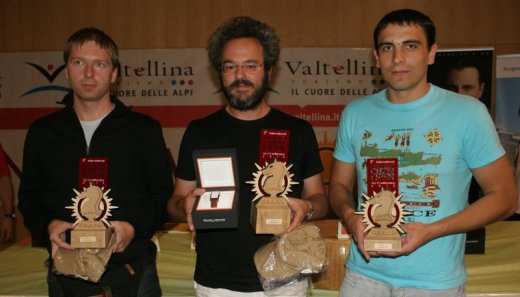 This is not the first prize for David in Livigno. During the week, the now Italian chess player (he was born in Luxembourg from an Italian family) has also won the Grand Prix Distillati Mazzetti D’Altavilla, taking home a precious crystal chessboard, whose hand-blown pieces are actually little bottles containing excellent liqueurs.

During the Grand Prix event Sinisa Drazic (Hotel Lanz) got the second place and Castellanos the third one. 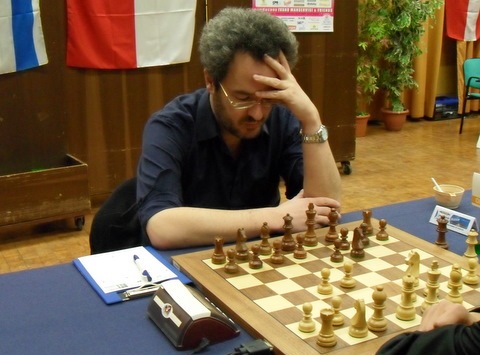 Mazzetti hasn’t been the only sponsor for the tournament. For the first player there was a Baume & Mercier watch, and for second and third places the Alpi di Livigno company (www.alpicarni.it) has offered two special prizes: a wheel of Parmesan cheese (about 47 kilos) and a whole Parma ham.

This has been an original way to support the Emilia region (where both this cheese and the ham are produced), which was shattered by a devastating earthquake a few months ago. 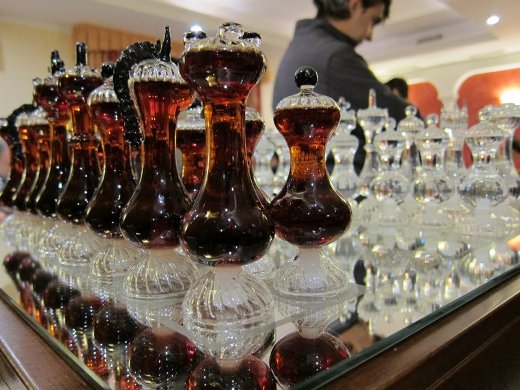 Moreover the Organizing Committee has received the support of Livigno Tourist Office and of the city council, as well as that of many hoteliers who have decided to “adopt” a GM for the whole duration of the event. Some hoteliers have also become friends with the chess players they were hosting, and many of them have also started to play chess.

During the International Livigno Chess Open three players have also got a norm. Samuel Franklin (England) earned the IM norm, while Satyapragyan Swayang as well as Renier Castellanos Rodriguez each claimed the GM norm. Thanks to this, Castellanos Rodriguez now has reached the full title of Grand Master.

Open B (reserved for players with Elo below 2000) saw the triumph of Steffen Mages (Germany), followed by Alessandro Bossi and Giancarlo Badano (Italy). Mayuri Karunanayake from Sri Lanka was the only female player. 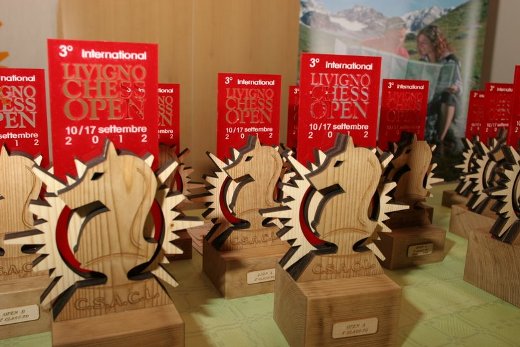 During the prize giving ceremony, all players were thanked by dott. Giambattista Ceresa, Pesident of the local Chess Club, and by Luca Moretti, President of Livigno Tourist Office.

Both of them concluded with a “goodbye”, hinting therefore that there could be further editions of this tournament (whose survival depends on the financing by the local government).

The organizing committee has received positive feedback for this tournament. Praise has been given to the high level of the event and to the beautiful panoramas, as well as for the welcoming atmosphere of the village.

Particular appreciation has been reserved to the apples that were offered by the organizers. More than 200 kilos were consumed throughout the tournament. The official website – www.livignoscacchi.it with live coverage of the game – was followed on average by 2,600 unique visitors per day, coming from 94 nations. 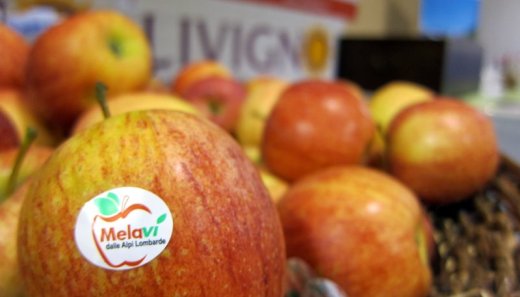 The Facebook page dedicated to the event saw more than 3,000 unique visitors in the week of the tournament. Many websites have talked about the event – among them the Fide official website. No less than 86 chess players have taken part in the International Livigno Chess Open. Among them 14 GMs, the same number of IMs as well as 7 FMs and one WFM.

The hope now is that the International Livigno Chess Open would go on next years as well, with the support of the city council and of the Tourist Office. In the meantime, you can visit the official website www.livignoscacchi.it where games and rankings are published.