FIDE President Kirsan Ilyumzhinov is delighted to announce that Professor Dr. Adrian Siegel, the President of the Swiss Chess Federation, has accepted his invitation to be Treasurer on his ticket in the forthcoming FIDE elections.

Ilyumzhinov is honoured that one of the most important European chess federations is willing to work together with him for the future of chess.

After holding and co-sponsoring a number of World Championship qualifying events with top-class players around the Europe, Ilyumzhinov is clearly gaining support among the European chess federations and is looking to improve the result from the previous election in 2010.

Switzerland hosted the FIDE Grand-Prix events in Geneve and Zug. FIDE also has an active office in Lausanne, in the House of International Sport (la Maison du Sport International).

It is a natural development that an active federation and FIDE are strengthening the ties by proposing the election of a respected chess personality. 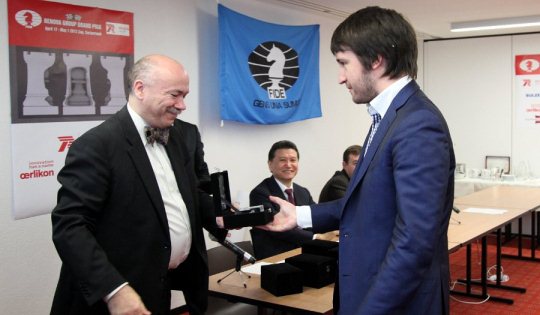