A new record number of 216 players from 43 countries are taking part in the Middle East’s longest-running elite open chess tournament, including 46 grandmasters. The opening ceremony was attended by Nasser Al Rahma, Assistant Secretary-General of the Dubai Sports Council, Ibrahim Al Bannai, Chairman of the Dubai Chess and Culture Club, and Mahdi Abdul Rahim, Assistant Secretary-General of the UAE Chess Federation, who marked the start of the tournament by executing the ceremonial opening move on the first-board match between Ukrainian top-seed Grandmaster (GM) Anton Korobov and the unheralded 109th-seed Vusal Abbasov of Azerbaijan.

Living up to their top-board billing, Korobov and Abbasov immediately went to work, dishing out a complex Najdorf variation of the Sicilian Defence. Abbasov, playing white, went all in with an aggressive set-up, developing his light-squared bishop to c4 and then to the b3 square, followed by a pawn push to g4 on the eighth move. The top-seed reacted poorly against white’s menacing attack and was too slow to organise a counter offensive on the queenside. By move 16, black’s kingside was already seriously under pressure of being overrun by a vicious pawn storm. The Azerbaijani underdog went on to punish Korobov’s lackadaisical play with a crushing bishop sacrifice on move 18. Abbasov then quelled a belated counterattack by Korobov along the a1-h8 diagonal before forcing resignation on the 32nd move. 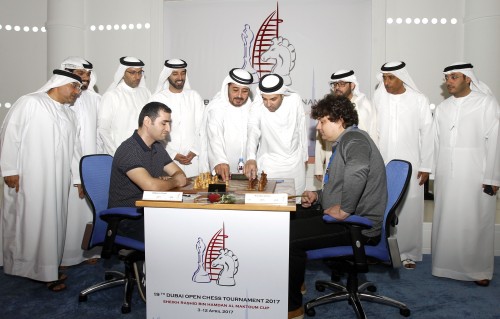 The UAE’s 13th-seed GM Salem A.R. Saleh also suffered a huge upset loss in the opening round after pushing too hard against 11-year-old Indian sensation V Pranav. Playing the black side of a Four Knights opening, Saleh sacrificed a pawn for the initiative, but he misplayed the middle game, allowing Pranav to gradually consolidate his position and win more material. Saleh tried to complicate matters with a desperate kingside attack, but the Indian youngster kept his composure to secure the full point after 59 moves.

Nasser Al Rahma, Assistant Secretary-General of the Dubai Sports Council, lauded the efforts of Dubai Chess and Culture Club in organising the event in the past 19 years. “The tournament this year welcomes players from 43 countries, maintaining its success as one of the leading open tournaments in the world,” he said. “Each year Dubai hosts more than 400 events, and chess is one of the events we are interested in.” He said the Dubai Sports Council is working with the club to organise an elite tournament featuring the best players in the world, stressing that such tournaments have a positive impact on promoting sports among local players, citing the achievements of GM Salem A.R. Saleh and FM Saeed Ishaq.

On the possibility of Dubai hosting the World Chess Olympiad again after gaining global recognition for hosting the 1986 edition of the biennial meet, he said: “The fact is that Dubai hosts various Olympic sports each year and, of course, we have the infrastructure to host any kind of event. Every week we host different international competitions, and this confirms our hosting and organising capabilities. All players around the world love to play in Dubai and achieve their sporting goals here.”
He said many sports heroes have played in Dubai, covering various sports such as chess, car racing, tennis, golf and others. He also said that Dubai will announce new additions to its sporting calendar soon.

Ibrahim Al Bannai, Chairman of the Dubai Chess and Culture Club, said it is a great responsibility for the club to maintain the high standards of the tournament and consequently attract the best players in the world. He said the event has also contributed in popularising chess in the UAE and in supporting Dubai’s tourism initiatives. He acknowledged the support of His Highness Sheikh Hamdan Bin Rashid Al Maktoum, Deputy Ruler of Dubai and Minister of Finance, and the Dubai Sports Council in maintaining the status of the Dubai Open Chess Tournament as one of the best in the world.

Echoing Nasser Al Rahma’s announcement, Al Bannai said the club is currently studying a new elite individual or team tournament starting next year, featuring players who are among the top 25 in the world. The Dubai Chess Open Tournament offers a total cash purse of US$50,000, with the champion receiving US$13,000 and custody of the Sheikh Rashid Bin Hamdan Al Maktoum Cup. The Dubai Open Blitz Chess Tournament on Friday offers cash pot of US$4,000.